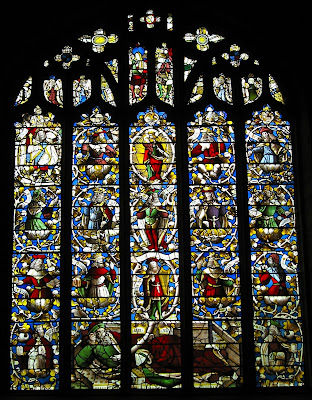 With a name all but impossible for the average English speaker to pronounce, this village church is one of the Vale of Clwyd’s greatest treasures: it has what is widely regarded as the best surviving mediaeval stained glass in Wales, a stunning carved roof, and other items of historical interest.
A short walk away is the holy spring which gives its name to the village (Llanrhaeadr means ‘church enclosure by the waterfall’) and which was regarded in mediaeval times as having healing properties endowed by its founding Saint.

The church was founded by St Dyfnog in the Sixth century, deliberately located close to the healing well. Not much is known about Dyfnog himself except, in common with many other Celtic saints, he is said to have bathed in its freezing waters in just a hair shirt with a chain for a belt, by way of penance and prayer. One of the mediaeval Welsh poets mentioned the well ‘which gives grace to all nations and cures all ills’. The water was said to cure scabs and ‘the itch’, smallpox and even those who were deaf and dumb. In the 18th century it was described as being enclosed in an elaborate building, though only the pool itself now remains.

There is nothing left of the first church, which was probably made of wood, but a church was mentioned in records of 1254 and 1291. The oldest part of the building we see now is the robust tower, which dates from the 13th century, with the double-naved church – common in this part of Wales – erected in the 14th century. Both the surviving mediaeval windows were taken down and hidden from the iconoclasts and reinstalled after the Civil War. The porch is harder to date, but the carved sides may be formed from the original rood screen, from around 1530. The church was restored in 1879-80 and again in 1986-9.

The interior is spacious, with the two naves separated by a handsome arcade or broad arches in blood-red sandstone. The walls have unfortunately been scraped of their plaster, though this does give it a rustic feel.

The famous east window is in the north nave: this is complete, and can be dated to 1533. It was the gift of the priest, Robert Jones, and depicts a simplified tree of Jesse, which illustrates the family tree of Christ from Jesse, through Kings David and Solomon, to Christ, shown with the Virgin. The figures are bold and expressive, and the local County guide-book points out that they rather resemble the form of playing cards, which achieved their traditional form around this period. In one or two places, the reinsertion has gone a little awry, but for the most part the scheme is as it would been originally. The colours – red, green, blue, gold and white predominate – are astonishingly vivid.

At the other end of the nave, the west window has glass dated to 1508, but this is more fragmentary, and the original images are mostly jumbled. The glass was discovered in a cottage in the 19th century.

The church’s other great treasure is its roof, contemporaneous with the windows, and carved and decorated with angels on the hammer-beams and corbels: the south nave over the sanctuary is particularly finely decorated, forming a ‘canopy of honour’.

Other items of interest include a golden pelican from 1762, feeding its young from its own blood; a huge ancient hewn chest beneath the Jesse window; and tucked away in the south east corner is the splendid classical monument to Maurice Jones, the local squire, who died in his early 30s in 1702. He reclines, resplendent in a huge periwig beneath a curtained archway, flanked with cherubs weeping into handkerchiefs.

The church is open every day, with an active congregation and choir, with the main Sunday service at 11.15.

St Dyfnog’s well is a short walk north of the churchyard; the various springs flow into a large stone-lined pool, sadly in need of restoration.