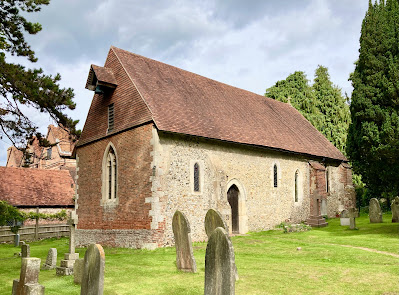 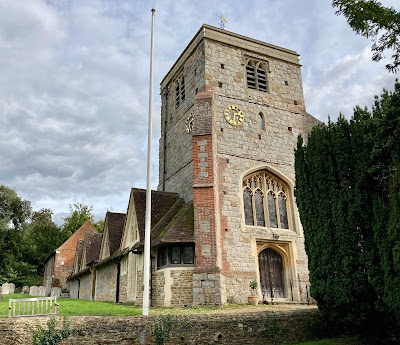 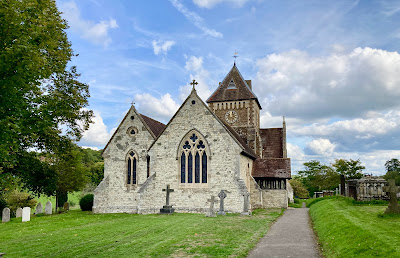 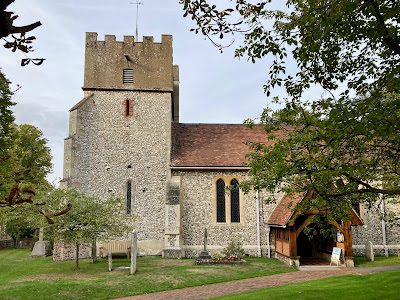 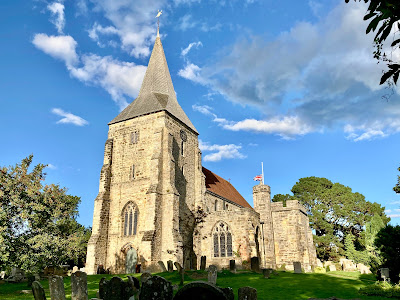 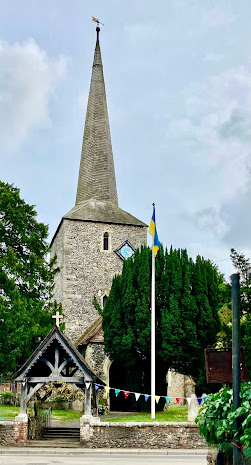 Eynsford is an elongated village with a pretty bridge and ford next to each other, both overlooked by the prominent tower and shingled spire of St Martin. The road over the bridge leads to Lullingstone Roman Villa, famous for its 4th century Christian wall paintings.
The church comprises a west tower and porch, nave, north aisle, south transept, chancel and an apsed sanctuary, much altered during its life, and now very brightly whitewashed and with a modern stone floor. It dates from the late 11th or early 12th centuries, clearly seen in the elaborate 12th century west doorway, which has a rounded arch with double rows of zig-zag and spirals, which continue down the sides. A smaller and later pointed doorway is set within the earlier one. The tower itself is 13th century, as is the south transept.
Inside, the chancel has two blank arches of similar 13th century date, indicating two long vanished north chapels, the pointed lancets within them reset following their demolition. The chancel's south wall has two Norman windows, but the chancel arch itself is 14th century. The north aisle (with cross gables) is 16th century.
After this rather complicated architectural history, the furnishings are relatively limited: there is a handsome and well preserved Perpendicular font with alternating rosettes and shields; an unusual trefoiled double piscina on shafts in the chancel, and a very jolly Coat of Arms to George III. In the porch are two mediaeval stone coffins.
Eynsford is part of the Benefice of Eynsford with Farningham & Lullingstone, and has a weekly all-age communion with choir and Sunday School, except for the first Sundays, which have an alternating joint service with Lullingstone.
St Martin, Station Rd, Eynsford DA4 0EH
Posted by David J at 15:31 No comments: 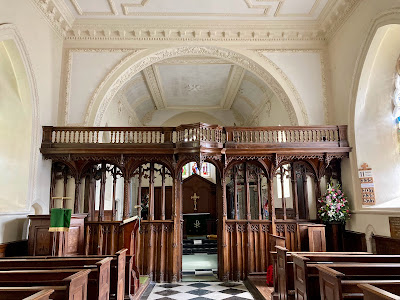 St Botolph lies in the grounds of Lullingstone Castle and found through an impressive red-brick Tudor gateway, to the side of the expansive lawn of Lullingstone Castle house. The house is largely early 18th century, but encloses a Tudor core.
The church itself in some ways echoes the house, for its current form essentially reflects the 16th and 18th centuries - but more on that, later. From the outside, it seems a typical Downland church, with flint and brick walls and a small bell-cote, the only slightly jarring feature being an early 18th century porch, classical in style, and painted brilliant white.
But the inside is a surprise (see photograph above): what was essentially a Gothic building - all the windows are 14th century Decorated - was thoroughly restored in the early 18th century by Percyvall Hart, who also altered the adjacent house. Most obvious is the fine plasterwork, but his work also extends to the pulpit, benches, a black and white marble pavement, and the font, oddly enclosed in a tall wooden box with a pyramidal top.
Of the Tudor period, there is a fine screen, erected in the early 16th century by Sir John Peche. This was later topped by a classical balustrade, but the original detailing includes pomegranates (the symbol of Katherine of Aragon) and Peche's own symbol, an "E" on a peach, a play on his name. The Tudor - 18th century theme continues with an impressive collection of stained glass and monuments. The Tudor glass in the nave includes a George and the Dragon, and the martyrdom of St Erasmus, his entrails being wound out like wool onto a distaff.
The monuments dominate the sanctuary and north chapel: the effigy Sir John Peche himself (d. 1522) lies below a slab and surmounted by a huge arched canopy, which divides the sanctuary from the chapel. The first Sir Percyvall Hart (d. 1581) and his wife lie opposite, on the south side of the sanctuary, the monument again filling the whole wall, through the style is now Classical. The effigies Sir George Hart (d. 1587) and his wife - affectionately holding hands - lie on a tomb chest in the chapel, the corners surmounted by statutes representing Labour, Rest, Death (a particularly eerie shrouded skeleton) and Resurrection. The monument to Percyvall Hart (d. 1738) effectively comprises the west wall of the chapel, covered in arcading incorporating palm fronds. In the chancel are three good brasses, to Sir William Peche (d. 1487), Alice Baldwin (d. 1533) and Elizabeth Brooke (d. 1544).
The church proudly proclaims that it is a parish church and not a private chapel, and it is part of the joint Benefice of Eynsford with Farningham & Lullingstone. There is a weekly Sunday service with monthly communion, using the Book of Common Prayer, and a monthly Sunday School.
St Botolph, Lullingstone Castle, Lullingstone Lane, Lullingstone DA4 0JA
Posted by David J at 14:00 No comments: