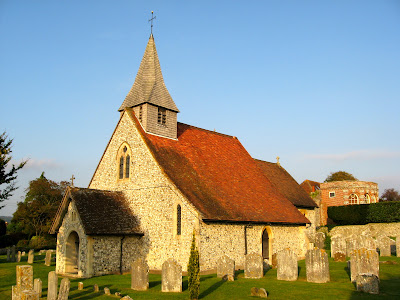 St Margaret’s is a delightful village church (although so small, it might almost be called a chapel) in a pretty village situated on a wide sweep of the Downs near Arundel. The church stands on a bank by a sharp bend in the lane, near the rather grand entrance of Eartham House next door (now a school).

Though not mentioned in the Domesday book, the church has Norman origins, as the nave and chancel were probably built around 1100. The chancel was rebuilt in 13th century, when the small south aisle was also added. A rather thorough restoration in 1869 renewed the exterior, replaced most of the windows, replaced a boarded bell turret with the present shingled one, and added the south porch.

The obvious Victorian exterior restoration doesn’t initially bode well, but inside there is much of interest. The west door (inside the porch), with its round arch and plain tympanum, is Norman; so is the lovely round-headed chancel arch, though its impact is now reduced by the (Victorian) openings either side.

Closer up, though, the chancel arch is even better: the volute capitals have delightful carvings. On the south there is a bearded man, and on the north a rather fierce looking rabbit (or hare), with tall, pointy ears. The small aisle is separated from the nave by just two bays of pointed arches, of early 13th century date, as is the tiny east lancet window. 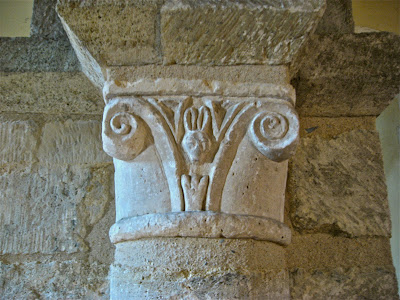 There are some fittings of interest: the chancel has a pretty floor of Victorian encaustic tiles, and a rough 17th wall monument to two young daughters of the the then vicar. The attractive organ is actually modern (1945). Other monuments include one to Thomas (d. 1800), the son of the poet William Hayley; and (behind the organ) to William Huskisson (d. 1830), former MP for Liverpool and owner of Eartham House. He was famous as the first reported railway casualty, having been run over by the Rocket on the opening day of the Liverpool and Manchester Railway in 1830.

The church has a monthly morning service, and a monthly Evensong in summer.