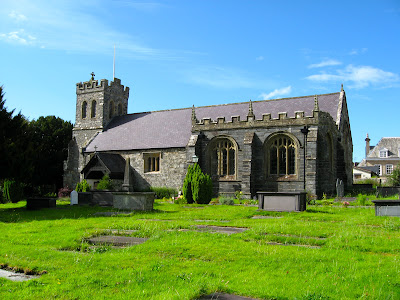 Llanwrst is a small but historic town in the Conwy Valley, perhaps known best for its attractive 17th century bridge. It has an interesting church, which includes the Gwydir Chapel, containing a remarkable set of funeral monuments to the Wynne family, former owners of nearby Gwydir Castle.

The first church was built nearby by the 6th century Celtic Saint Grwst, but the present site was donated in the 12th century by local lord Rhun ap Nefydd Hardd, to atone for his father’s sin of murdering Prince Idwal, son of Owain, King of Gwynedd. The church , begun around 1170, suffered during the turbulent history of the area; it was partly destroyed in the early 1400s during Owain Glyndwr’s uprising, and burned to the ground in 1468 during the Wars of the Roses by the men of the Yorkist Earl of Pembroke. The present church is the replacement built in 1470. It was restored in 1884, when the present tower was added.

The adjacent Gwydir Chapel was built by Sir Robert Wynne in 1633-4, Treasurer to Queen Henrietta Maria and owner of Gwydir Castle, who also helped finance the town’s bridge. It served as both family chapel and mausoleum until the building of Gwydir Uchaf chapel, nearer the castle in 1673. Ironically, Sir Robert himself is buried in Wimbledon.

The church consists of a nave and large north aisle, separated by an arcade, all executed in the perpendicular Gothic style. There is no chancel arch, but in the North Aisle is the stone staircase leading up to the Rood Loft. The main attraction is the Rood Screen, a magnificent survival. Although its niches of the musicians’ gallery lack the statues of the saints they were intended to house, the carving of the screen below is superlative. It includes images of both Tudor Roses and Pomegranates, symbol of Catherine of Aragon.

The screen’s panels each contain swirling filigree carving of a different designs: one depicts vines and bunches of grapes, another pigs eating acorns. The depiction of the symbols of Christ’s Passion, including a ladder, spear, nails and crown of thorns, and of a cock crowing (from the betrayal of St Peter), are particularly rare.

Executed in the Gothic style, this single room is a veritable treasure trove. The walls are lined with the stalls behind which the family would have sat, elaborately carved in the Jacobean style, the ends of the stalls adorned with peculiarly primitive heads. All around are the memorials of the Wynnes, with marble tablets and a set of rare engraved memorial brasses depicting the deceased in portrait form. On the south wall is the incredibly elaborate monument to Sir Robert’s father, Sir John (d. 1627). 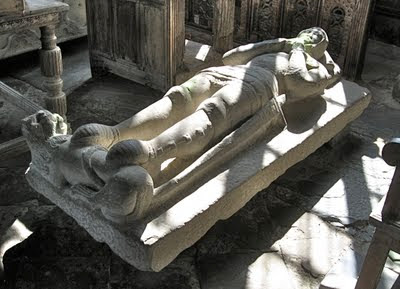 On the floor are two earlier memorials: an empty and lidless stone coffin, decorated with quatrefoils, and said to the be the tomb of Llewellyn the Great (d. 1240), who was buried at nearby Maenen Abbey. Next to this is a very impressive 15th century stone effigy of a knight, said to be that of Hywel Coetmor (above), who fought for the Black Prince at Poitiers and later took part in the rebellion of Owain Glyndwr. The effigy is incredibly detailed and retains its sword.