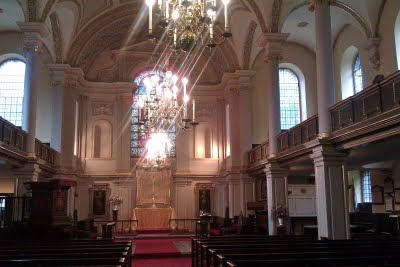 St Giles is the parish church for a significant part of the area near Tottenham Court Road tube, but the church itself is tucked away, under the shadow of Centrepoint. There has been a church on the site for over 900 years and it has an interesting and complex history.
History

The church was originally founded in 1101 by Queen Matilda, wife of Henry I, as a monastic foundation to serve a leper hospital. At that time, St Giles was a small village outside London. At the dissolution of the monasteries in 1539, the hospital's chapel became the parish church. This building was replaced in 1630 by a new church, paid for by donations by Alicia, Duchess Dudley. The area soon became densely populated, and the great plague of London started in the parish in 1665. The graveyard is one of several in London particularly noted for being used for plague victims.

By the early 18th century, structural problems with the 'new' church necessitated its replacement, and the present church was erected 1730-4, designed in the Palladian style by Henry Flitcroft. Until 1783, the church was the last on the route to the Tyburn gallows, and by tradition the churchwardens paid for the condemned prisoners to have a last drink at the adjacent Angel pub. The church also has connections to Maryland in the USA, being the resting place of its founder, the 1st Lord Baltimore.

Since then, the parish has had a varied history, much of the time being known as a byword for slums, although now it includes some of the most expensive property in the UK, and the resident population is outnumbered by the number of people who work and visit the parish. The church was renovated in 1896, and again in 1952.

The broad design of an elegant 'Classical Box' is similar to many London churches built around this time: the dominant external feature is the west tower, which has an octagonal lantern topped with a spire. The large upper windows are all round-headed. The rectangular plan incorporates a large nave of five bays, with galleries above the aisles, looking onto a shallow but impressively tall sanctuary. The tunnel-vault roof is supported on elegant Ionic columns, and the whitewashed plaster is picked out in a decorative scheme of gold and pale blue.

There are some interesting furnishings, many of which pre-date the present building. These include the pulpit (in the north aisle) from the West Street chapel, from which John and Charles Wesley preached regularly during the years 1743-1791. The organ, from the previous church, dates from 1671 and was rebuilt in the present case in 1734. The pulpit, of inlaid mahogany, dates from 1676. Of the many monuments, that of George Chapman (translator of Homer), dated 1634, was probably designed by Inigo Jones. The nave has some splendid 18th century style chandeliers and there is a wooden model of the church in the north aisle.

The church today ministers to a very varied parish, with services daily except Saturday, and is a venue for regular concerts and music recitals.