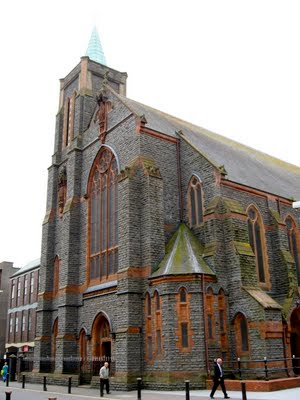 St David's the newer and smaller of Cardiff's two cathedrals but, unlike the ancient foundation of Llandaff, several miles to the north-west, St David's is at the heart of the modern city.

The growth of Cardiff during the industrial revolution saw a growing mission by the Roman Catholic Church to the population of this burgeoning city. From 1839 a support fund for a new church was developed, augmented by fund-raising in Ireland, and the first church was consecrated on a site in David Street in 1842. It was named after the Principality's patron saint at the request of Lady Catherine Eyre of Bath, a major benefactress.

By the end of the century, however, it was becoming too small for the growing congregation, and the present building was erected in Charles Street. It was opened in 1887 to designs by the architectural firm Pugin & Pugin. It contained elaborate furnishings in the Neo-Gothic style, with the High Altar and Reredos alone costing the then substantial sum of £1,000. In 1915, Cardiff was designated an Archdiocese and in 1920 St David's was designated the cathedral.

However, the cathedral was destroyed during an enemy air-raid on 3rd March 1941. Rebuilding began in 1953, and St David's reopened in 1959, albeit with furnishings in a more modern style.

The church is designed in a restrained, Decorated Gothic style. The exterior is executed in rock-faced Pennant stone with red sandstone ashlar dressings. The interior consists of a single large nave, with a large chancel arch leading into a small sanctuary, and a large stone west gallery supported on two substantial piers. The walls have arches to each bay, some housing confessional boxes, others small chapels. The most interesting decoration is the stained glass, some of which was saved from the original building.