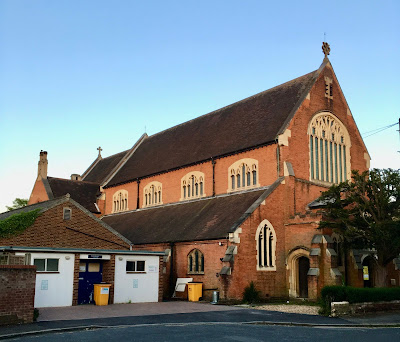 St Andrew's sits tucked away, despite being just a few minutes' walk south from the main shopping area. This isn't the upmarket Wimbledon of the tennis or the Common, but of modest terraces and social housing built originally for the working class.

Founded as a mission church of Holy Trinity Church on the Broadway, the first temporary building was opened in 1883. A growing congregation soon required something more permanent, and architect William Henry Lowdell delivered a competent if unremarkable neo-gothic design in red brick with sandstone detailing, featuring an impressive 8-light west window about the main doorway. The building was consecrated in 1909, and St Andrew's became a parish in its own right in 1910.

The interior has a nave with 4 bays of arcades, with wide pointed arches on round piers, and a Lady Chapel. Most of the glass is clear: the east window contains images of Christ enthroned flanked with the patron saints of England, Scotland, Ireland and Wales.

The church has a traditional service at 9am and a more informal service at 10:30, with a 'play and praise' service especially aimed at parents with young children at 10:00 - full details are on their  website. 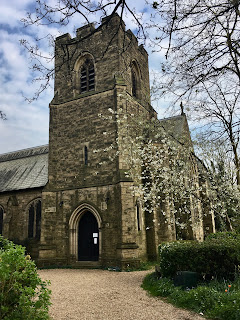 The picture above gives a slightly false impression; while St John the Divine has as charming a churchyard immediately around it as any, it is located in a very urban part of south London, a few minutes' walk from South Wimbledon underground station. Sandwiched between the High Path housing estate and the large industrial estate on Merantun Way, it sits amidst the noise of constant traffic on the adjacent A219 and A24.

The church itself was built in 1913-14 to mark the centenary of the death of Admiral Lord Nelson, whose residence (with Lord and Lady Hamilton) at Merton Place was located close by. The land for the church and the adjacent gardens was gifted by J Mackerell, the great nephew of Rear Admiral Isaac Smith (1752-1831), the first officially recorded European to land in Australia in 1770. The architect was C H Gate, who delivered a competent neo-Gothic design, with north and south aisles, chancel, Lady Chapel, and a north-west tower with porch under.

The furnishings most of interest are the altar, made from wood from Nelson's Flagship HMS Victory, and pre-Raphaelite stained glass in the Lady Chapel by Edward Burne-Jones. The church now is part of the Merton priory team, and features a busy parish life with Messy Church alongside traditional services. 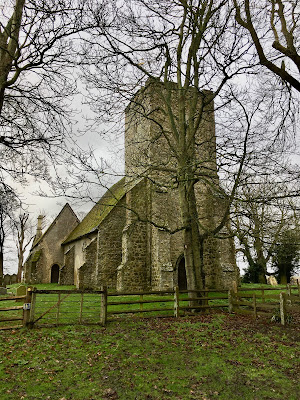 Declared redundant in 1983 and now maintained by the Romney Marsh Historic Churches Trust, St Augustine's sits alongside a quiet side road off the busy A2070, with only a few houses and a farm for company. It doesn't even have a surfaced path - just a grassy lane, which in Spring is a carpet of daffodils.

The church dates from the 13th Century with a tower added early in the 15th. The interior is unusual in that the wide, aisleless nave opens eastwards through two separate arches, onto the chancel and the spacious Lady Chapel. The roof has slender crown-posts on tie-beams, clearly of an ancient date. The whitewashed interior is plain and dignified, with simple Victorian pews and clear glass. There is a fine Coat of Arms of George II, and the pulpit reuses tracery from a Perpendicular screen.

In the chancel, there is a fine 15th Century Piscina and a single Sedile with an embattled top. The Lady Chapel was, at some point, graced with an open fire grate in the corner - presumably to warm the Vicar before winter services... 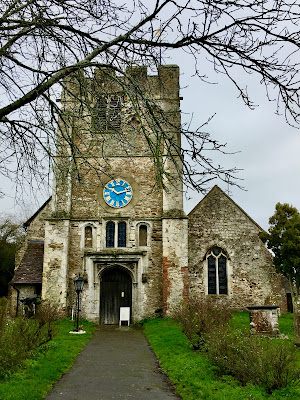 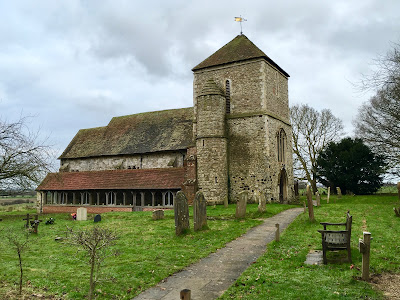 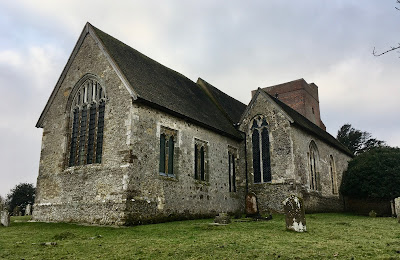 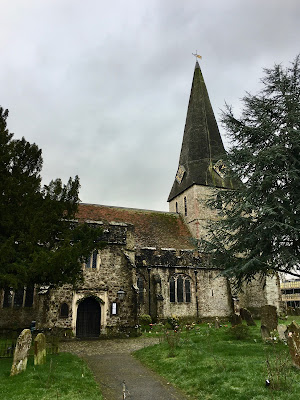