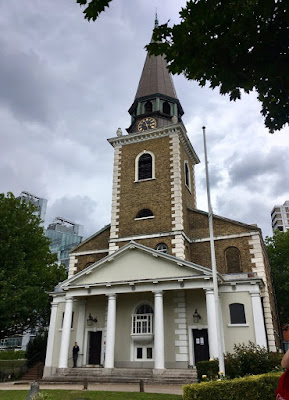 St Mary's is a lovely Georgian church on an enviably prominent location on the banks of the River Thames, opposite Chelsea Harbour. The site is one of the oldest places of worship "south of the river".
There has been a place of worship here since around 800AD (the church celebrated 1,200 years of worship in 2000), but the current building was erected in 1775-77 to replace the earlier medieval church.
The architect was Joseph Dixon, and he delivered a building of classical  Georgian design, with a Doric portico surmounted with a tower and spire, executed in brick with stone dressings. The detailing (such as the spire) is happily vernacular and almost rustic. It would happily feel at home in New England.
The interior comprises a large undivided nave, with galleries on three sides, and a small apsidal sanctuary. The east window here, in the gothic style, looks oddly out of lace: it was in fact rescued from the previous church and contains stained and enamelled glass of exceptional quality, dating to 1631 and attributed to Bernard van Linge.
Other (modern) windows are also of interest, and reflect some of the famous members of the congregation: the poet William Blake was married here in 1792, and turner painted views of the river Thames from the vestry window at the front. In the spacious crypt (now housing a pre-school nursery) is the resting place of Benedict Arnold (1741-1801) who changed sides in the American War of Independence, and is regarded by Americans as an early traitor.
The church is home to a lively and active congregation, with worship in the modern Catholic style.
St Mary's Church, Battersea Church Road, London, SW11 3NA
Posted by David J at 13:59