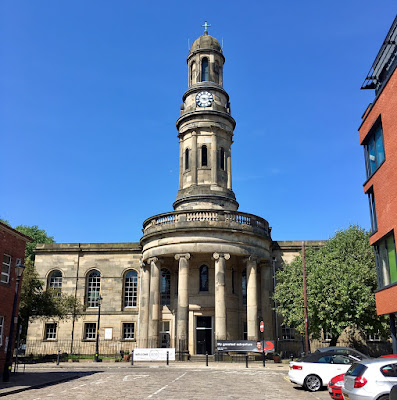 Residents of fashionable Marylebone could be forgiven for doing a double-take driving east out of Manchester when, tucked away close to the Roman Catholic Cathedral and the University of Salford, they see the double of their own church of St Mary's, Wyndham Place.

They will not, however, have teleported home. The church they see is in fact St Philip's Chapel Street, in Salford. Both were Commissioner's churches, both built around 1822-24, and both were given the same design by Sir Robert Smirke, in a flagrant example of intellectual recycling.

The design is Greek Revival: an impressively handsome semi-circular portico of Ionic columns is surmounted by a classic 'pepper-pot' bell tower. Behind, the church has a conventional rectangular plan, with tall round headed windows above a row of smaller straight-headed windows. It is a wonderful addition to the local streetscape, and a Grade II* listed building.

Inside, the church was designed as a classic preaching box: large galleries on three sides would have allowed seating for a congregation of 1,000. However, the interior was re-ordered in 1895 by J Medland Taylor, to provide a larger square sanctuary, to provide for more ritualised worship (although the galleries survived). An interesting feature is that it retains it original organ, made by Renn & Boston in 1829.

The church is now home to a new partnership, with a 'plant' from the New Wine network of churches, with a charge to reinvigorate the mission of the church in the area for the 21st Century. The church provides services in both traditional and more lively charismatic evangelical styles.