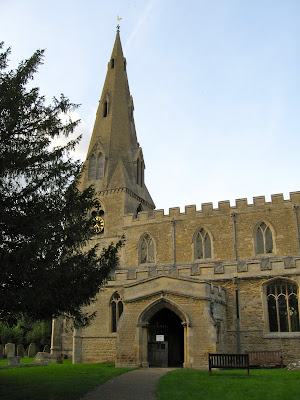 St Peter & St Paul is one of those churches that brings a stir to the heart of church enthusiasts. Sited at the end of a short cul-de-sac off the village centre in a spacious and well-kept churchyard, what particularly excites is the windows: they are a text-book display of Gothic. Early gothic lancets in the chancel give way to simply Y-tracery in the clerestory, and decorated and perpendicular in the aisles. These are further enhanced by a lovely collection of jolly gargoyles.

The church itself reflects a programme of building and remodelling in every century from the 12th to the 16th. Most of the fabric was rebuilt in the 13th century, when a low west tower was added. The broach spire was added around 1300 and the porch around 1340. The nave was remodelled in the 14th century; the roofs date from the 15th century (chancel) and 16th century (nave), and the windows reflect a similar pattern of change. In 1877 the tower was rebuilt in an amazing operation that kept the spire in place while the walls beneath were rebuilt - a plaque at the ear of the nave records how this was done.

The nave and aisles are rather scraped of plaster, although this does reveal some of the archaeological details, such as the line of the original and rather steep nave roof above the chancel arch. Most of the windows, mercifully, have clear glass, allowing the wonderful variety of tracery to be fully appreciated. Both nave and chancel have a fine set of carved corbels, and the chancel roof has fine angels and monstrous bosses.

But the glory is the chancel itself, which has splendid blind Early English Gothic arcades leading to an immaculate composition of three lancets, with rere-arches in the east wall. Interestingly, the aumbries below this, behind the altar, are large and square: did the church really have so much plate?

The church is immaculately maintained and has a regular pattern of traditional services supplemented by a more informal, monthly all-age service.