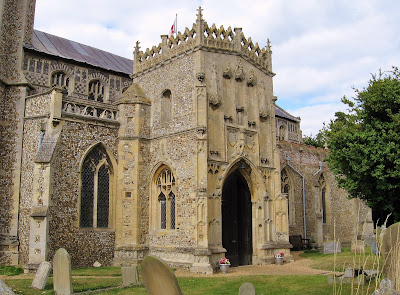 The story of St Mary's is that of a porch and a roof, each a confident display of the late mediaeval wealth of this small village.

The records indicate that there has been a church here since Saxon times, and it is probable that the church was rebuilt early in the Norman period. A lovely rhyme, written by the monk Lidgate, may describe this event:

A newe church he dyde edyfye
Ston bought from Kane out of Normandye
By Se, and set upon the strande
At Ratylsdene, and carried forth by land

If this is true, a more remarkable fact would be that the Rattlesden River was navigable so far inland in those days, but it is a nice story. More certain is the fact that late mediaeval wool wealth resulted in the church being impressively rebuilt over 200 years later. The chancel and south aisle are both 14th century and in the Decorated Gothic style, the East window being a good example of reticulated tracery. But the remainder is all Perpendicular: the porch was built in 1435-55, the North Aisle in the late 1400s, and the tower around 1513. The church has an impressive record of bequests during the 1400s for both the porch and the north aisle. The tower and spire have had a particularly chequered history, being damaged by storms and lightning in 1602, 1703 and 1852. The present tower dates from the Victorian rebuild and is impressive, if a little geographically odd, since it of the type found in the Nene Valley in Peterborough.

The porch is two-storied, and decorated on the front by panel tracery with tall niches, and a large ogee arch over the door. The east wall has chequerboard flush-work (a Suffolk specialty) and inside the ceiling is vaulted, with no fewer than 21 bosses. Inside, the delicate Perpendicular arcades draw the eye to the chancel arch, but the more excitement is found by looking up; here, a clerestory of  double-light windows sits beneath the incredible double-hammer beam roof, supported on tall wall posts. Everything is covered in angels; there are angels on the wall posts, at the end of each hammer beam, and two rows of angels on the ceiling panels for good measure. The pattern is repeated over the aisles; when originally built (and vividly coloured) they must have been quite a sight.

The church also has a fine mediaeval carved screen, the panels of which have been repainted, and high above the chancel arch, a coloured vaulted rood canopy, and pews with wonderful carved poppy-heads. These date from the late 15th century, and depict charming animals, saints and bearded men. The eagle lectern is early 16th century, and of a type made for a chained bible.