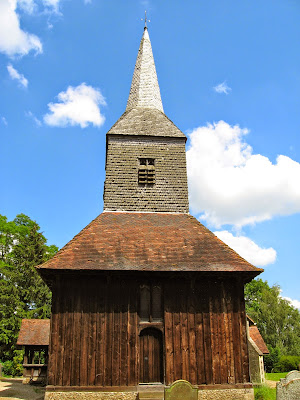 St Margaret's is picture-postcard pretty, surrounded by trees and alongside a lovely Georgian Rectory. Both are reached across a level crossing on the busy London to Norwich railway line, and its visibility from passing trains makes the church a popular choice for weddings.

The church dates from around the 12th century, but reached its current form in the 15th century, when the south aisle, porch and (later in the century) the wonderful wooden bell tower were added. The nave roof also dates from this period. The interior is spacious, and includes charming details such as the nave corbels, which represent the symbols of the four Gospel Evangelists, angels and demons. The principal architectural feature of interest is the bell tower: this rests on 10 posts with complex cross-bracing, and contains an original peals of bells dated from between 1392 and 1538.

The other great treasure is the east window. Surrounded by somewhat distracting decorative plasterwork (installed, according to the guidebook, in 1918), the window takes the form of a Tree of Jesse, depicting the familial line from David to Christ. The window dates from around 1460 and is an exceptionally complete example of stained glass from the period.

Other items of interest include the chancel screen, which includes elements of the mediaeval original, and the 17th century Tanfield Memorial, commemorating John Tanfield (1547-1625), his wife, three sons and four daughters.