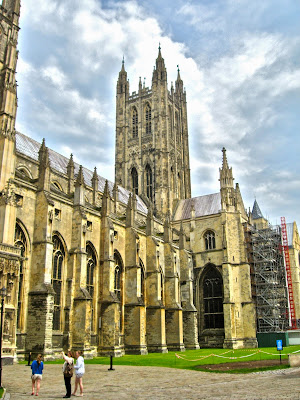 Canterbury Cathedral needs no introduction: the seat of the Archbishop of Canterbury has overseen the history of Christianity in England since St Augustine arrived here in 597AD and baptised the Ethelbert, King of Kent, and remains the "mother church" of the Anglican Communion.

Since then, it has seen the martydom of Thomas a Becket in 1107, the canonisation of whom (and subsequent development of his shrine) led to the cathedral becoming a major centre of pilgrimage - gloriously captured in Chaucer's Canterbury Tales. The pilgrims' offerings also helped to finance major rebuilding, resulting in the glorious building we see today - now part of the Canterbury UNESCO World Heritage Site.

A Saxon cathedral was established here after the enthronement of August as first Archbishop of Canterbury, but of this nothing remains: a fire in 1067 resulted in the Normans rebuilding the cathedral in the Romanesque style under Bishop Lanfranc, 1070-77. The choir was soon enlarged by Prior Ernulf and, of this, the crypt (1096) survives. The choir itself was destroyed by fire in 1174. This was rebuilt 1174-1200, and demonstrates the transition from the Romansque to the newer Gothic style. Most of the remainder of the cathedral was rebuilt in the Perpendicular Gothic style, starting with the nave and transepts (1379-1405), cloisters (1397-1414), and the central tower (1493-1497).

The cathedral contains suitably opulent furnishings, most notably its stained glass: over 1,200 square metres of stained glass includes one of the largest collections of mediaeval glass in Europe. It is also the burial place of a long list of notable people, besides Becket: these include St Alphege and St Anselm, both former Archbishops; Edward, the Black Prince (1330-1376); Henry IV (1367-1413) and his wife Joan of Navarre (1370-1437); Archbishop Stephen Langton (1151-1228), one of the key figures in the development of the Magna Carta; Orlando Gibbons, organist and musician (1583-1625); and the author Somerset Maugham (1874-1965). Sadly, the magnificent shrine of Becket was destroyed at the reformation, but those of Henry IV and Edwards the Black Prince survive.

Today, the cathedral and its precinct remain a place of pilgrimage and continue to play host to a constant programme of services, musical and other events. There is a charge for entering for a tourist visit.