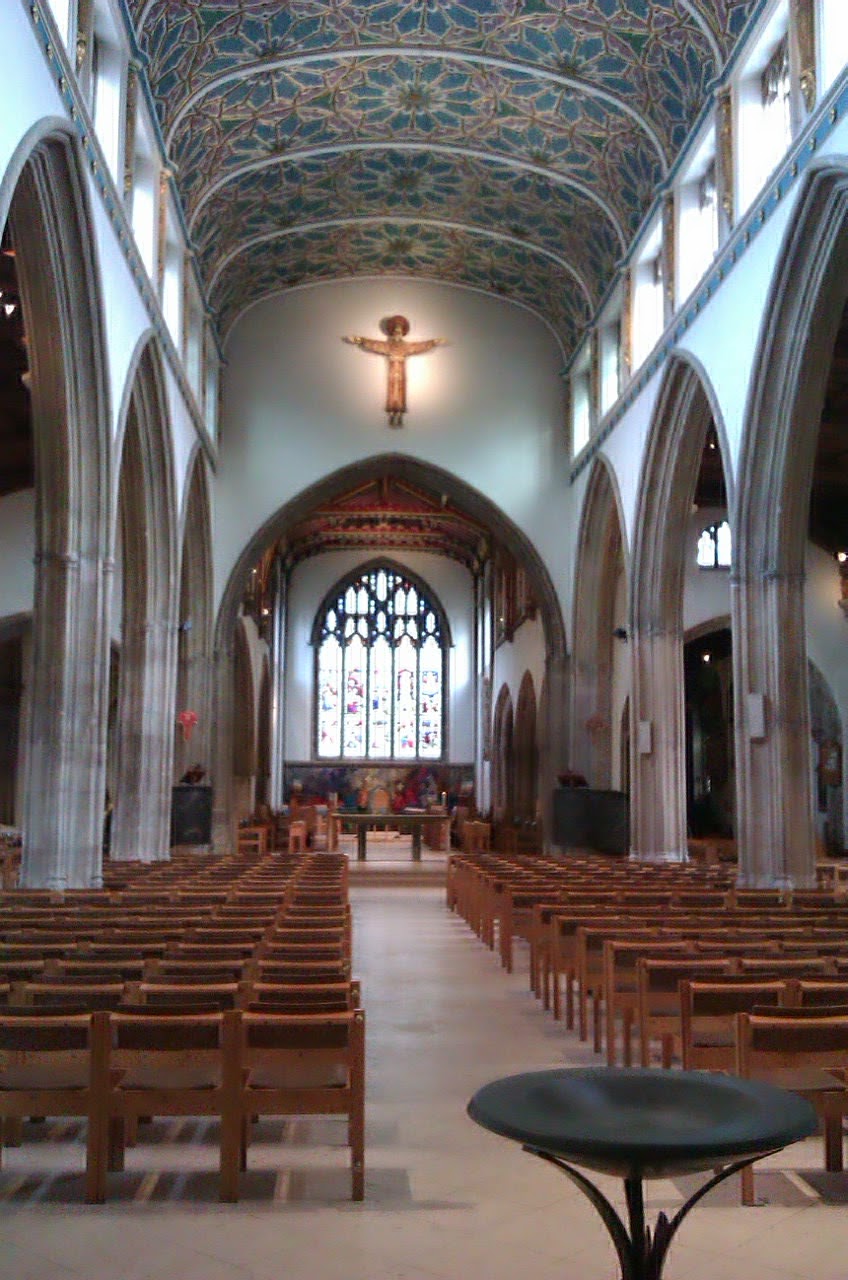 Chelmsford has England’s second-smallest cathedral, set in an attractive square tucked away from the bustle of the city centre. Originally the main town parish church, it was elevated to Cathedral status in 1914 when the diocese was created to cater for the burgeoning population of Essex and the east of London. The Cathedral is dedicated to St Mary, St Peter and St Cedd.

A church was originally erected on the site around 1200, but the present building is largely the work of the early 15th century. This church comprised an aisled nave, a chancel with chapels, a west tower and the magnificent south porch. The spire was rebuilt in 1749.

The church has been extensively restored and extended. The nave collapsed in 1800 following excavation in the vaults, and was rebuilt by John Johnson. Frederic Chancellor restored the chancel and south chapel in 1862, and also added the current north transept and outer north aisle in 1873. The east window and chancel clerestory is the work of the famous church architect A W Blomfield, dating from 1877-8. After elevation to a Cathedral, two east bays were added to the chancel to create more space in 1926-8 to designs by A K Nicholson.

The exterior is a mix of rubble and flint with brick and stone dressings. The style is largely late Perpendicular Gothic: the best features are the tower and the especially fine 15th century south porch, with its fine patterned flush-work.

The spacious  interior largely reflects the various restorations, especially that of Johnson, whose fabulous Tudor Gothic nave ceiling was painted and gilded in 1961. The 3-bay chancel arcades and tower arch are original 15th century work.

The cathedral has many interesting works of art from the 20th century, and good Victorian and 20th century glass by Clayton & Bell, and Nicholson. There are some outstanding memorials: the large, brightly coloured wall monument in the north aisle to Thomas (d. 1566) and Avice Mildmay (d. 1557) has a dramatic ogee head, with excellent Jacobean strapwork, and panels depicting the husband and wife with their large family in procession in two panels. Also in the Mildmay chapel, the Earl Fitzwalter (Benjamin Mildmay), (d.1756) is commemorated by a striking monument with a large urn, flanked by cherubs and a pediment supported by Corinthian columns of Siena marble, signed by James Lovell.

The cathedral is open daily for services and visitors, and has a reputation for excellent music.