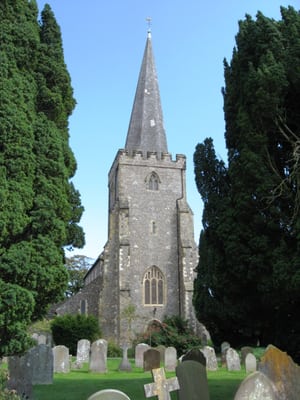 West Tarring is surrounded on all sides by the suburban sprawl of modern Worthing, but it much the older and, originally, more important settlement.

The village still retains its attractive original High Street, on which are several old pubs and a lovely 15th century half-timbered house, with a distinctive overhang (now the Parsonage Restaurant, and a grade II* listed building). It also contains the remains of an old palace belonging to the Archbishops of Canterbury (see separate review), now the Parish Hall. The origins of the town date back at least to 941AD, when King Athelstan gave the Manor of Terringes to the Church of Christ at Canterbury.

Domesday mentions two churches, although nothing of these buildings survives. Today, the skyline is dominated by the fine tower and spire of St Andrews, one of only a handful of Grade 1 Listed buildings in Worthing. Reflecting its status as a peculiar of Canterbury, it is a huge church for such a small village. Saint Richard, Bishop of Chichester, took refuge here in 1245-1247, when he was temporarily banished from his See by Henry III.

Although heavily restored by the Victorians, the five-bay Nave and aisles are essentially Early English Gothic from the 13th century, with lancet windows in both aisles and the clerestory. In the south aisle is a fine trefoil-headed piscina, preserved in fine condition by being plastered over in the Reformation rather than destroyed. In the 15th century, the present tower and chancel were built, both with fine Perpendicular windows. The spire  covered in wooden shingles - was added in the 16th century.

But the church's real glory lies in its woodwork: a fine 15th century chancel screen, complete with an impressive (and rather intimidating) row of spikes along the top, and a set of six misericords, with fine carvings underneath, including two bearded heads with flowing locks, and floral compositions. The Victorians continued the panelling around the chancel wall, but the very fine carved Communion Rail - described by Nairn and Pevsner in 'The Buildings of England' as 'perky'  is Jacobean.

Unfortunately, the original font was taken to New Zealand by the principal landowners in the 19th century, and the present one is a copy. However, the interior of nave is decorated by a complex mosaic decorative scheme of 1885, designed by the church architect William Butterfield. On my visit, I was made very welcome by the Rector and Churchwarden, very proud of their historic church.

Outside, the attractive churchyard is full of 18th and 19th century tombs, many of high quality. The oldest and most poignant is a table tomb to one John Parson, dated 1633. A listed monument in its own right, it carries a short but painfully evocative verse:

It's a perfect antidote to some of the more sentimental Victorian epitaphs.