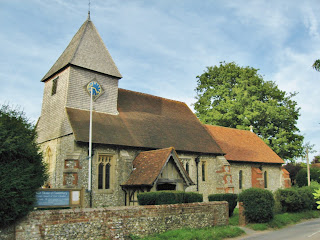 East Clandon has a homely little church, clearly well cared for by its congregation.

The Victoria County History records the nave as dating back to c. 1100, although the windows were renewed in the Perpendicular style in the 15th century. The chancel dates to around 1220, with the unusual feature of twin lancets at the east end, rather than the usual three. The communion rails date from the late 1600s.

The small aisle is entered through a single arch, although it ends at the west end in a pillar rather than the usual respond, indicating either that there was another bay or that one was intended. The aisle itself was rebuilt in the 1900s, and contains the tomb-chest of Stuart, Lord Rendel (1834-1913), beneath a mock-Jacobean ceiling. Rendel was an industrialist, Liberal politican and an early benefactor to the University of Wales.

In the wooden bell turret, one of the three bells dates from 1500, a happy pre-Reformation survivor.