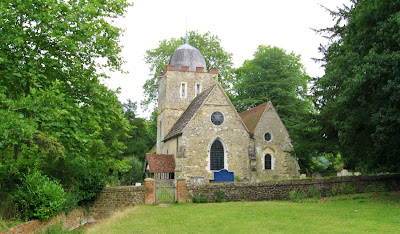 Albury boasts four churches: the original Saxon church of St Peter and Paul; the Victorian replacement (in the re-sited village) of the same dedication; a 19th century church north of Albury Park, erected by Henry Drummond in 1840 to house the Catholic Apostolic Church (of which he was an enthusiastic convert and advocate); and a modern 'Church in Barn'. The Saxon church, splendidly isolated in Albury Park, is now redundant and in the care of the Church Conservation Trust, although occasional services are still held here.

The north wall and tower base are Saxon, but the nave is mostly Norman work, with a 13th century chancel and south transept, and a large 14th century aisle of 3 bays. The tower is topped by a jolly 18th century cupola with wooden shingles.

Stripped of its pews and furnishings, the interior is atmospheric but bare, save for a late 14th century wall painting of a wonderfully bearded St Christopher and the fantastical, deeply coloured decoration of the south transept, designed by Pugin in 1839, as a setting for Drummond's memorial. Simpler is the brass to John Weston (d. 1440) on the south transept floor.