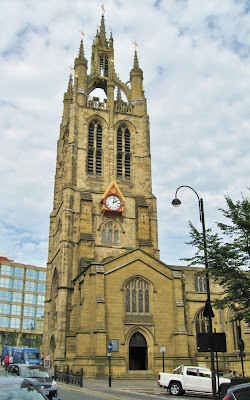 The Cathedral Church of St Nicholas was originally built as a parish church and was elevated to cathedral status with the advent of the Diocese of Newcastle in 1882. The largely 14th century building is a distinctive landmark in the city and retains much of its mediaeval fabric.

A church was built on the site soon after the erection of the castle, around 1091. Originally a wooden structure, it was rebuilt in stone towards the end of the 12th century. It was repaired and extended over successive centuries, including the raising of the clerestory above the nave in the 14th century, and the erection of the famous tower with its lantern spire, in 1442. Badly damaged by Scottish invaders in 1640 and 1644, the cathedral underwent heavy restoration in the 19th century under the supervision of Robert J Johnson.

The plan is conventional, with both the nave and chancel having 4 bays of aisles, with transepts and north and south porches. The mediaeval windows are a mixture of Decorated and Perpendicular Gothic. The building has a number of interesting memorials, including a 14th century effigy of a  knight with a shield and a lamb at his feet. On the south chancel wall is a large incised brass from the grave of Roger Thornton (d. 1429) and his wife, said to be the largest mediaeval brass in England. The city's growing mercantile prosperity is reflected in the many memorials from the 17th, 18th and 19th centuries, notable among which is that to Admiral Lord Collingwood (1748-1810), who assumed command at Trafalgar after the death of Nelson.

The Cathedral has a busy life of worship and music and is open every day of the year.