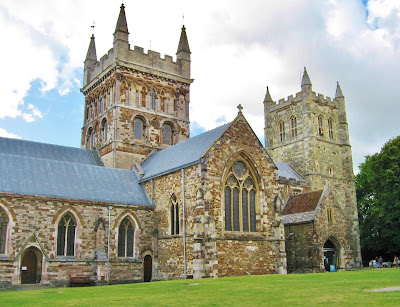 Wimborne Minster is a fascinating church, occupying pride of pace in the historic market town. It contains architecture from all the major mediaeval styles from Norman Romanesque to Perpendicular Gothic.

The church was founded around 705AD as a nunnery by St Cuthberga, sister of King Ina of the west Saxons. It was visited by St Boniface, the evangelist of Germany, and Alfred the Great buried his brother Ethelred (837-871) here. But the monastery was destroyed in a Danish raid in 1013. Edward the Confessor refounded the church as a college of secular canons in 1043, and it prospered as a royal peculiar during the Middle Ages.

The oldest part of the church is the crossing under the central tower, and the huge arches date from around 1120. The upper part of the toweris later, and the nave later still, with wonderful arcades of transitional arches - pointed in the gothic style, yet with Norman decoration of chevrons and dogtooth, and some wonderful corbels of animals and human heads. The original Norman clerestorey now sits below a later one in the Perpendicular style.

The north transept contains a Saxon remnant (a stair turret) within a Decorated Gothic space, rebuilt in 1350. The walls have fragments of wall paintings from the 13th-15th centuries. The south transept was extended around 1220. The chancel has a mixture of styles and sits above a crypt built in 1340. Finally, the west tower was added in the Perpendicular style in 1464 to house a peal of bells: this allowed the later opening up of the central tower space.

The church has many fittings of interest. In the west tower is a 14th century astronomical clock, adjacent to the early Decorated font. there are some very fine and fascinating tombs: a fine coloured Jacobean monument to Sir Edmund Uvedale (d. 1606), apparently with two left feet; a magnificent tomb chest with effigies to John Beaufort, Duke of Somerset (d. 1444) and his wife Margaret. the arch above has a wonderful corbel figure of Moses with a plaited beard. Also in the chancel is a brass to King Ethelred, dating from 1440, and the only brass to an English King. the adjacent choir stalls have Jacobean misericords carved in 1610.

In the Holy Trinity chapel is the tomb of Anthony Erricke, a barrister who asked to buried in the wall so je would be neither inside nor outside the church. predicting his own death in 1693, he died ten years later, so the dates were rather crudely changed on his coffin.

The church has a regular cycle of services during the weekand is a popular visitor attraction, with a small shop.