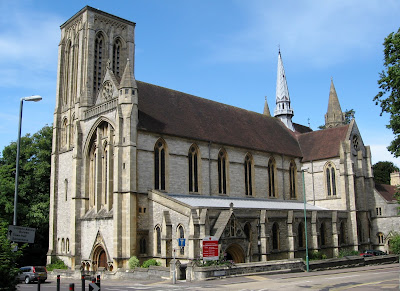 St Stephen's is one of the masterpieces of Gothic revival architecture in England, and is one of two major Victorian churches in Bournemouth. It was a favourite of poet John Betjeman.

The church was commissioned in memory of the first Vicar of Bournemouth, Alexander Morden Bennett, who was a leading exponent of the high church Tractarian movement. The architect chosen was J L Pearson. The foundation stone was laid in 1881 and the tower finally completed in 1907.

The church has a double-aisled nave with transepts, and an apsed chancel with a narrow ambulatory behind. Pearson chose a restrained Early Gothic style, but the astonishing interior is achieved through a clever use of space: the aisles and arcades are relatively low, but are surmounted by a very tall clerestory with large paired lancet windows; the final bay before the chancel arch tapers inwards, giving the impression of greater length; the low springing of the nave vault creates an impression of height; and the double aisles and ambulatory means that almost every vista presents a forest of columns.

Although austere, the choice of high quality materials and the fact it is vaulted throughout lends the church a serene beauty, enhanced by spare but high quality furnishings. The delicate wrought iron chancel screens and gates were designed by Pearson, and the floors are inlaid with imported coloured marbles. But the highlight (almost literally, as it is deliberately floodlit) is the gilded reredos by Nathaniel Hitch, with panels of saints upon background of rich blues and reds.

The church still retains its Anglo-Catholic tradition of worship and a renowned choir.