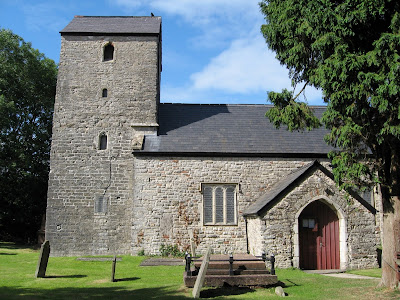 St Cadoc's is a pretty little church and a surprising discovery, in what is now effectively a suburb of Barry. It nestles in a little green enclave in the midst of Victorian terraces and modern estates.

The origins of the church are obscure, and made harder to read because of a very thorough rebuilding in 1885. It is said to have been founded by Cadoc himself (who lived in the 5th-6th centuries), but another version suggests a founding in 800AD. Either way, the present structure is based on a later Norman stone-built church, and a couple of round-headed windows (one rest by the Victorians in the nave and one in the tower) suggest a 12th century rebuilding.

The tower, porch and chancel are largely 15th century, but the nave is largely Victorian. The nave has the remains of a 15th century rood loft staircase, as well as mediaeval water stoups and font. The aisle-less interior has a countrified feel, enhanced by the pretty 17th century altar railings.

During the Victorian renovations, fragmentary remains of wall paintings were discovered, as well as a Lord's Prayer and Ten Commandments, presumably dating from the 16th-17th centuries. The church has regular services in the Anglo-Catholic tradition.