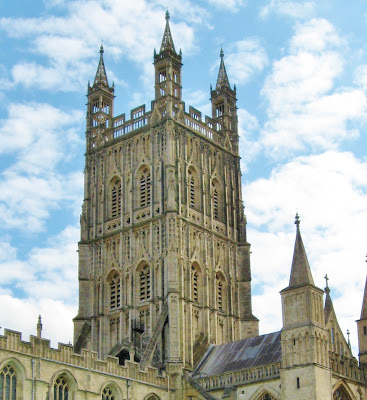 Gloucester's is one of the major cathedrals of England, and the resting place of Edward II.

The cathedral started life as an abbey in 678AD, although little is known about it before the Norman conquest. William the Conqueror appointed Serlo as Abbott in 1072, who set about the task of rebuilding, and creating the building we see today. Henry III was crowned here in 1272, and the 13th Century saw a number of building projects, including a new tower, tower and refectory. But the turning point came in 1327, when the deposed King Edward II died at nearby Berkeley castle (by tradition, in particularly grisly fashion), and was brought here for burial.

His son, Edward III, had a magnificent tomb erected in honour of his dead father, and it soon became a place of pilgrimage. This provided the funds for a major programme of rebuilding in the Perpendicular Gothic style, including the famous cloisters, south porch, west front, the tower, Lady Chapel and new vaults over the choir. The abbey survived the dissolution of the monasteries through its elevation to cathedral in 1541 - the presence of a royal tomb may have helped ensure its survival - a role it has performed ever since.

The interior reflects the contrast between the robust Romanesque architecture of the Norman period and the soaring fan vaults of the Perpendicular. The cloisters in particular - among the earliest examples of fan vaulting - are celebrated for their beauty. Its fittings are a match for the architecture: the great east window is partly filled with glass dating from 1350, and more 15th century glass is found in the Lady Chapel.

Notable tombs include the magnificent tomb of Edward II, with its extraordinary clusters of pinnacles; and the lovely wooden wooden effigy of Robert Curthose (1054-1134). he was the eldest son of William the Conqueror, was Duke of Normandy (1087-1106), and the unsuccessful claimant to the English throne. It is a perfect depiction of early Norman military dress, though it dates from a hundred years after his death.

Today, the cathedral is famous as one of the homes of the three choirs festival, one of the oldest classical festivals and dating from the early 18th century. It also has the usual cycle of services, festivals and events that characterise modern cathedral life.