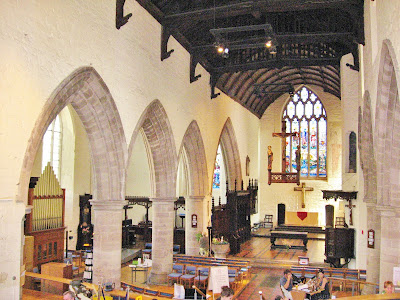 This interesting mediaeval city-centre church is a short walk from the city's cathedral, and well worth a visit in its own right.

The first church on the site was probably erected around 1200, but rebuilt later in the 13th and in the 14th centuries, possibly because of earthquake damage. Most of the present structure was in place by 1330. The church underwent a major restoration in 1997, which included major work to the tower and spire which both twists and leans.

The church has a spacious nave with north and south aisles and a west tower. The nave arcades are classic Early English gothic, and are complemented by Decorated and Perpendicular Gothic windows and the very high ceilings. The south aisle chapel has 17th century fittings, but the 14th century choir stalls in the chancel and north aisle chapel steal the show: they are very fine, and have misericords with classic decorative themes. There is also a Jacobean pulpit (c. 1621) and a 16th century font in which David Garrick, the actor and theatre manager, was baptised in 1717. A beam in the south gallery has an interesting 'rude' carving, and adjacent is a 19th century window depicting Christmas, complete with a little boy opening his new GWR railway locomotive.

The western end of the nave and south gallery now form part of a very popular cafe. On my visit there was also an art fair in the south chapel, ensuring this church is busy throughout the week.