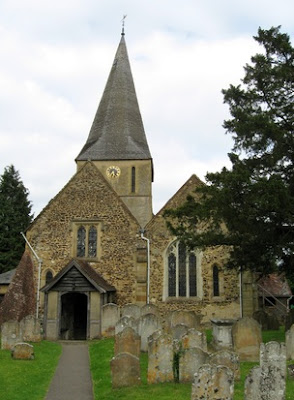 This large village church stands near the centre of the picturesque settlement of Shere, and nestles in a valley close to the ridge of the North Downs.

The nave and lower stages of the tower are Norman, built around 1150-90, to which a large south aisle was added in the 13th century. The church was lengthened and the chancel rebuilt in the early 14th century. Later additions include the fine north transept window of Curvilinear tracery from the 15th century, and a churchyard lych gate by Lutyens.

The outside is dominated by the robust tower, which carries an equally robust broach spire. The south side has a fine Norman door, but the main entrance today is through the west entrance, which has a fine (and heavy) 17th century panelled door, and leads under  an 18th century west gallery.

Inside, the elegant arcade of octagonal piers separates the nave from the south aisle that is so large is feels like a double nave. The arches through to the chancel are early 14th century replacements, but there is a fine 13th century arch between the south aisle and south chapel with detached marble shafts.

The fixtures and fittings are of particular interest. Several windows have fragments of mediaeval glass, and the font of Purbeck marble, with a central stem and four corner shafts, dating to around 1170.  The church has some notable brasses: the oldest, dated 1417, is of the rector, Robert Scarclyff, wearing his vestments; on the floor is a large memorial to John Touchet, Lord Audley, (1423-1490). He lies resplendent in full plate armour. Close by is a brass to John Redford (d. 1516) and his wife, with his six children in mourning. On the wall of Lady Chapel is a small brass of a lady, dated 1520.

However, of more curious interest is the squint and quatrefoil window on the north wall of the chancel, originally openings to the cell of an anchorite, Christine Carpenter. Anchorites were hermits, often devout teenage girls, walled up (until death) in cells attached to churches. They prayed and gave advice and in return were given food and provided with the sacraments. Christine was interred in 1329, but seems to have left and was ordered to return on ‘pain of death’ in 1332.