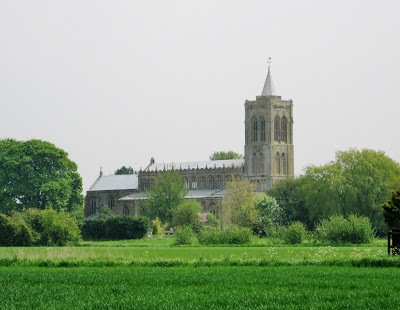 The small Lincolnshire village of Gedney possesses a magnificent mediaeval parish church. From a distance, it seems almost to float along the fenland, with much to interest the visitor.

From a distance, the church could almost be mistaken for a cathedral, with its handsome tower and tall, clerestoried nave. Begun in the 13th century, the church has architecture of all the major Gothic periods, including Early English (largely confined to the lower stages of the tower), Decorated and Perpendicular. The west wall of the nave shows the roof line to have been raised twice, once in the 14th and then later in the 15th centuries. The chancel was substantially altered in the 19th century.

The church is comprised of a large aisled nave, west tower, chancel, and a two-storeyed porch. The stumpy spire is the only disappointment, clearly a compromise, presumably over fears the foundations would not support anything taller.

As you enter the church, you immediately encounter one of its treasures: a rare, original mediaeval wooden door, decorated with heraldic devices and with an original, smaller wicket door within. Once inside the nave, all is space and light: most of the extensive glass is clear, although there are patches of mediaeval glass, most notably a Jesse window in the east window of the north aisle. A small window in the south wall of the chancel has a delightful mediaeval depiction of Christ, presumably with St John the Divine - or possibly the window's donor? - looking on in rapture.

The graceful octagonal arcade columns are from the Decorated period, and many of the nave windows have beautiful flowing tracery. The nave ceiling dates from the 15th century, with tie beams, roof bosses and a single hammerbeam. Both the arcade, and the 15th century clerestory above it, have label stops and corbels with the heads of angels, kings and queens, ogres and some delightful representations of common ailments such as deafness and toothache.

In the south aisle is an early 15th century brass of a woman with a puppy at her feet, and behind the adjacent side altar are the remains of a 13th century tomb effigy over a large 15th century carved tomb chest. Above them is the magnificent memorial to Alard Welby and his wife Cassandra, erected in 1605. There are many other items of interest - much of the woodwork is late mediaeval or Jacobean, and the font base is dated 1664 (the font itself being late mediaeval).

The church hosts regular services and is also used by the children from the adjacent primary school.