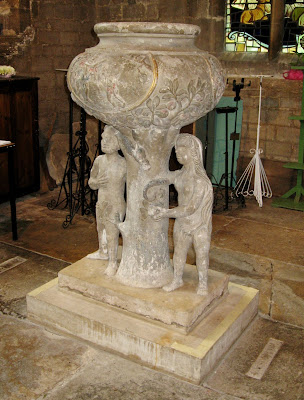 Moulton is a pretty village close to Spalding, known for having the tallest windmill in the country. The church has an imposing tower and spire and can be seen for miles around.

The church dates largely from 1180, but was much altered in the 14th and 15th centuries, and restored in the 19th. The tower and spire are the main draw on the outside: the windows were inserted in the 15th century, but most of the fabric, including the spire supported on tall flyers, is 14th century. The tower is decorated with some wonderfully elaborate blind arcading.

Inside, the long nave with its arcade supported on robust piers is largely 12th century, with the 15th century clerestory windows having been inserted to the 12th century fabric. The 19th century restoration was rather heavy, but at least restored the fine late 14th century rood screen. There is an interesting early 18th century font, supported by figures of Adam and Eve.

The church supports a busy parish life with regular services and social events.