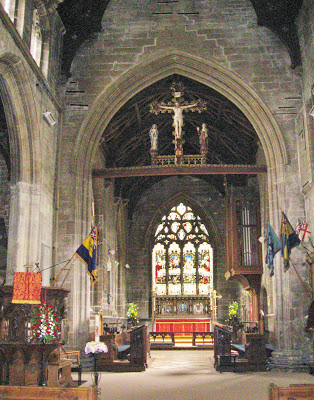 Holbeach has a large parish church which dates from the 14th century, almost entirely in the Decorated Gothic style, with some interesting furnishings and fittings.

The church was built largely from 1340-80, with the addition of the porch in c. 1700. The main Victorian addition was the heavy and dark stained glass.

From the outside, the church is dominated by its tall spire, built in the 14th century, but remodelled in the 15th. The porch has distinctive turrets on either side of the door, doubtless giving rise to the contention that it came from Moulton Castle. Once inside, the nave is dominated by the elegant Decorated Gothic arcade of 7 bays, supported by quatrefoil piers, built around 1350. The chancel arch is slightly later, c. 1360, next to which are the remains of the staircase to the rood loft. The Decorated Gothic windows which fill the walls are a wonderful combination of ogee arches and fleur-de-lis - textbook patterns of curvilinear tracery. They would be so much nicer with clear glass.

Much of the furnishing is Victorian, but the font is mid 14th century, and in the north aisle are tombs of special interest. Pride of place goes to the tomb chest and effigy of Sir Humphrey Littlebury of Holbeach Hurn, (d. c.1380). His effigy, in full plate and mail armour, is well preserved. It has a sword belt, sword and shield, his feet resting on a lion and his head on a helm - decorated with the rather alarming image of a woman's face. The tomb chest below has elaborate niches of ogee arches. Adjacent, on the floor, is a brass of a knight which has sadly lost its head, and against the wall is a tomb chest bearing a memorial brass of Joan Welby, d. 1488.

The church is the centre of a busy parish life, with regular services and a tea shop open in the modernised tower space.