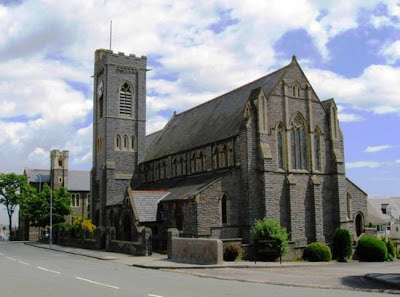 All Saints church is one of Barry’s most imposing landmarks: set high on the crest of a hill, its tower can be seen from along the coast.

The decision to build a new Anglican church in Barry was taken in response to the rapid growth of the town in the late 1880s, following the construction in 1884 of the Barry Railway and Barry Docks. To begin with, much of the town was built hurriedly in wood, before the more familiar brick terraces began to be built. The original parish church of St Nicholas, overlooking the harbour, was no longer large enough for the fast growing new town. So, in 1902 a decision was taken to built a new church, named All Saints, on land vacated by the Admiralty, to plans by the local architect E M Bruce Vaughan. Construction began in 1907 and the church was consecrated in 1908. A second stage of building began the same year, including the familiar tower, and was completed in 1915. The ‘mother’ church of St Nicholas was closed in the 1950s.

The new church was largely built in the early Decorated Gothic style. The plan has large north and south aisles, a broad nave with simple Gothic arcades on round piers, and a chancel. The church retains much of its original appearance, although it has chairs rather than the traditional pews. For me, the interior is rather more successful architecturally than the exterior, which looks somewhat uninspiring - and its setting is not helped by being flanked by some rather dull, grey blocks of flats.

Worship is in a middle-of-the-road style, and the church has an active congregation and busy parish life, with a number of different groups meeting during the week (see website for details). The daughter church of St Baruc’s in Barry Island is also part of the parish.