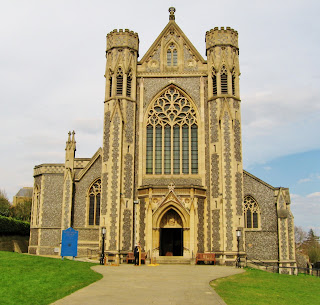 The Sacred Heart is Wimbledon's Catholic parish church and a prominent landmark on the ridge between Wimbledon and Raynes Park.

The church was funded by Edith Arendrup, a member of the Courtauld family who, having moved to Wimbledon, persuaded the Jesuits to begin a mass at her home in 1877. Seven years later she paid for the building of the present church, to designs by the architect Fredrick Walters (1849-1931), who also designed Buckfast Abbey. The nave was completed in 1887 and the rest of the building by 1901. A planned tower was replaced by twin turrets flanking the west front.

The exterior is of knapped flints with stone dressings. Designed in the decorated Gothic style, the interior resembles an abbey: an aisled nave, beneath a tall clerestory, leads to a chancel with an ambulatory and radiating chapels. The dimensions are impressive: the nave is 100ft long and 60ft high. The arcades carry niches with saints connected with the Jesuit Order. The church has numerous late Victorian and 20th century fittings, the best of which are found in the St Ignatius Chapel in the north aisle.

The church normally has three daily masses (six on a Sunday, plus a Saturday night vigil mass) and is the centre of a vibrant parish life.