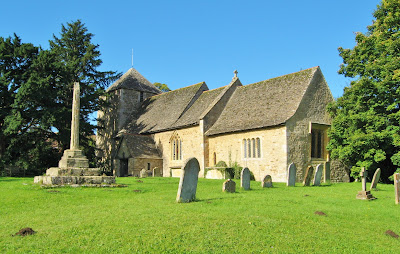 St Lawrence lies at the end of the village, next to the modern offices of the Diocese of Oxford. The largely 12th century church has a pretty wooded churchyard with a much-weathered 14th century cross.

The church guide claims that the oldest part of the church is chancel and suggests a possible pre-Conquest date: however, the earliest surviving details point to a foundation around 1100, with the tower added in in the 13th century and the porch in the 17th century.

A restoration by John Macduff Derick in the 19th century replaced a much earlier and very narrow chancel arch with the present arch with flanking squints in the Norman style, which complement the south door.

The church consists of nave, chancel, porch and tower, with exterior walls are of rubble with ashlar dressings. The tower has a simple pyramidal cap, and all is roofed with stone slates. The best architectural feature is the very fine 12th century south doorway, now inside the porch: this features elaborate zig-zag carving, scalloped capitals, red stone flanking columns and animal-head stops.

Inside, the interior has a peculiar pale coloured limewash, which emphasises the white-washed chancel arch. The nave and chancel have an interesting collection of windows, covering the 12th to 16th centuries, including simple round-headed arches, Early English lancets, a 15th century east window with cinquefoil tracery and an unusual late 13th century window with lozenge tracery. There is a staircase in the north wall of the nave to a long-vanished rood screen.

The furnishings include a lovely 15th century octagonal font, with different tracery designs on each face, and some nice monuments. The north-west nave window contains stained glass fragments brought from Ypres after the First World War.

The church is open during the day in summer and there is a regular Sunday morning service.