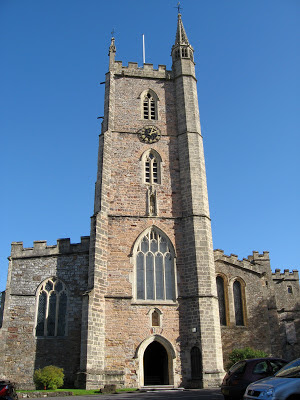 The site of Holy Trinity in Westbury-on-Trym has an eventful history dating back to Saxon times, and has been closely associated with various Bishops of Worcester. The largely mediaeval parish church is well worth a look today.

Westbury was the site of an early Benedictine monastery in the 9th and possibly even the 8th century. Under St Oswald, Bishop of Worcester, it became England’s earliest reformed house in 963AD, although the community of monks moved to East Anglia when offered more fertile lands there. The monastery was re-established in 1093 under bishop Wulfstan, and became a collegiate church in 1194 under Bishop Celestine.

In the mid-15th century Bishop John Carpenter made Westbury a joint cathedral with Worcester, to serve the needs of an expanding Bristol. He rebuilt the chancel and the north chapel. The south chapel was built by William Canynge, a famous Bristol merchant who was dean of Westbury 1444-76.

The exterior is dominated by Carpenter’s tower; his seated effigy sits in a niche above the West Door. Inside, the earliest parts of the church date to the 13th century, and include the arcades of circular piers with simple pointed arches, the south aisle itself and the chancel arch. The west window in the south aisle has 3 stepped Early English lancets, and there is a 3-arch Sedilia and Piscina, also from the 13th century, further along the south wall.

The chancel itself and the flanking chapels date from the 15th century, along with the clerestory and most of the remaining windows. The north chapel is of two bays and the south has three bays of tall, delicate Perpendicular arches. Remains of rood stairs can be found in both aisles.

Monuments include the cadaver of Bishop Carpenter himself: the original tomb was desecrated in the time of the Commonwealth, but now lies under a Victorian monument between the south chapel and chancel. In the north aisle is a painted memorial with a skull to Miles Wilson (d. 1567) and his daughter, Elizabeth Revell (d. 1581). In the south aisle on the east wall is a charming memorial to Rose Large (d. 1610), shown kneeling at prayer, erected by her son.

The church is the centre of a busy parish life and hosts daily worship.