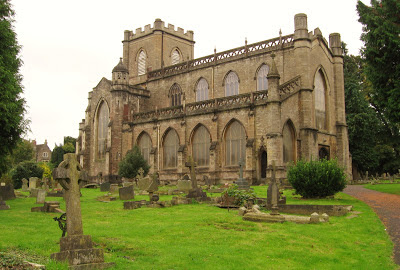 Christ Church lies just a short walk south west of the town's mediaeval parish church of St John the Baptist, set attractively in the centre of an extensive churchyard on Christchurch Street West.

The church was built largely to provide additional capacity at a time when the St John's was no longer large enough to cater for its congregation, and particularly to provide more free pews (as opposed to those which were rented, as was the custom at the time).

The church is an early and rather heavy essay in neo-Gothic, built in 1817-18 to designs by the local architect George Allen Underwood (1793-1829). It was much altered subsequently, most notably with new window tracery by Manners & Gill around the 1840s onwards, supposedly based on those of the church at Yatton, near Weston-super-Mare. The churchyard was originally shared with St John's, but is closed for burials. It has a fine long stone wall on Christchurch Street - which, alas, has lost its railings.

The style is broadly Neo-Gothic (Perpendicular) and cruciform in plan, with a tall clerestory, low crossing tower and substantial aisles to the nave. An unusual feature is that the altar is under the crossing, with a later projecting Lady Chapel (now the Sacristy) added in 1929.

Furnishings are decent Victorian work, including a substantial carved reredos and a later Rood erected in 1910, and some brightly coloured stained glass. The church has had an Anglo-catholic tradition since the mid 1850s, and provides for a friendly welcome.