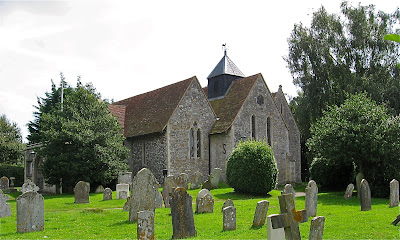 Fishbourne is best known for the remains of the impressive Roman palace which once stood in the village. But it is has a pretty little church with mediaeval origins, if rather heavily rebuilt in the 19th century.

The church was built between 1243 and 1254, but may initially have consisted only of the present chancel. The nave and bell-cote were added in the 14th century. Little changed until 1821 when a north transept was erected, with a stuccoed porch. In 1847 a south aisle was added, and the transept and nave were enlarged westwards to form the church we see today.

The setting is a little surprising: although uncomfortably close to the A27, it is well screened by trees and can be approached from the village by a short, public footpath through woods and fields, which provides an altogether more sylvan setting.

The exterior walls are a mixture of ragstone and flint, all very neat and testifying to the Victorian rebuild. Inside, apart from a small section of the arcade wall at the west end, the nave and aisles are now basically of 19th century date. The aisles of three bays on either side are each as wide as the nave, and give it a bright and spacious feel.

The fabric of the chancel is 13th century, with one original lancet to the south east. (All the rest were renewed.) This space is altogether more intimate, and contains some ancient looking pews – possibly Jacobean? - used as choir stalls. In one of the lancets is a fragment of old glass – possibly 16th or early 17th century.

Other items of interest include two memorials at the west end, one in Latin to Anthony Wells (d. 1594) and  one to an unknown member of the Lane family, dated 1612 and carrying the crest of the family. Outside on the north east corner of the chancel are pilgrim crosses, possibly made by Continental visitors going to the shrine of St Richard of Chichester, from 1262 onwards.

The church has a lively and active congregation, currently raising funds to build a new parish hall.