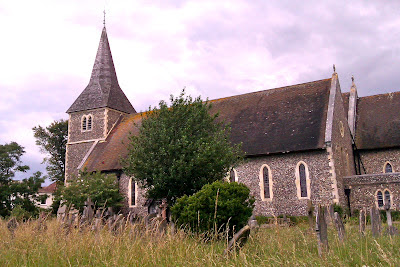 St Leonard's is an ancient foundation, now much rebuilt and in a firmly suburban setting, and effectively in Portslade. The main offices of the Diocese of Chichester sit alongside.

Originally an Anglo-Saxon settlement, Aldrington is mentioned in the Domesday Book as Eldretune but there is no mention of a church. The predecessor of the present building was erected in the 13th century, but a gradual decline of the settlement - hastened by severe storms in 1703 and 1705 - meant that by 1800 there were just two people in the parish and the church was largely ruinous (the roof having collapsed in 1738). 18th century drawings show it as a single celled building with lancets and a tower.

The arrival of the railway in nearby Portslade in 1840 stimulated a slow process of suburban development, and the church was rebuilt in 1876-8 by Richard Herbert Carpenter (1841-93). He largely followed the pattern of the original building, although the roundel above the two east lancets was replaced by a sexfoil.

Further suburban development necessitated another expansion, consisting of a nave and baptistery to the north (1931) with a new chancel (1936), both by Milburn Pett. This effectively relegated the original church to a south aisle, with an arcade of square piers inserted between. A planned north aisle was never built, and the 'temporary' brick facings on the exterior of the north wall contrast with the neat knapped flints elsewhere. The arcade has, in recent times, been partitioned so the nave and south aisle now form two separate spaces.

The church sits in a pretty and overgrown churchyard (the noticeboard explains that this is intended to foster a wildlife reserve). The carefully knapped flint walls betray its relatively modern origins, but the shingled broach spire, lancets and pretty carved porch give it a pretty, rural feel.

The interior is something of a surprise after this introduction, as the nave and chancel are wide and bright and contrast sharply with the original church, although they are still nominally in the Gothic style. Pevsner didn't like Pett's work at all, describing it in the Sussex volume of the 'Buildings of England' as "very horrible".  The chancel has an elaborate sedilia and piscina in a Decorated style, with three lancets in the east. On the outside of the east wall of the chancel is a stone commemorating the extension in 1936 - surprisingly to modern sensibilities - laid with full masonic honours.

Furnishings are all modern, with some Clayton and Bell glass in the south aisle (the original church).