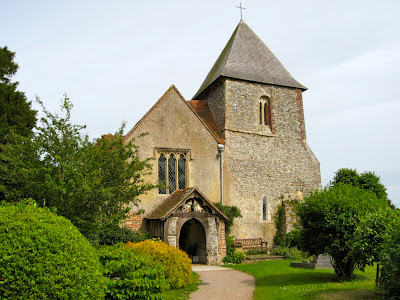 Yapton has a delightful church set in a quiet corner of the village. For once, the lovely exterior leads to an equally charming interior, only lightly restored by the Victorians.

Although there was a church on the site in the Saxon period, all that remains of this is the lower part of the tower – the north tower wall is the south wall of the Saxon nave. Most of the structure dates from 1180-1220; the nave and tower date from 1180-1200 and the chancel from 1200-1220. The pretty porch was added some time after 1400, along with the west window. The additional buttressing of the tower, to counter the clear effects of subsidence, may also have been added in this period.

Dormer windows were inserted in the ceiling in the 17th century, and the present East Window inserted in 1902. This replaced an 18th century one which itself replaced the original lancets (the remains of which are clearly visible).

From the outside the church is picture-postcard pretty, with the leaning and heavily-buttressed tower flanking the nave and porch. From the sides, the roofs sweep low over the aisles to barely 5ft above the ground.

Inside, the nave has four bays of plain, barely pointed arches, resting on square capitals. The capitals are decorated with foliage, though those on the south aisle look unfinished – local legend has it that the masons were called away to repair Chichester Cathedral after the fire of 1187 before they could finish. The fine king-post roof with its tie-beams is probably original.

The south aisle has an old round-headed window to the east, and two small round windows indicate an early attempt to let in more light. The chancel arch rests on two fluted corbels, and the spacious chancel beyond has pairs of tall lancets to the north and south

Of its furnishings, the church claims its font to be Saxon, but others point to an early Norman date. Either way, it pre-dates the present church. It is decorated with chevron banding and arcades of arches enclosing Maltese crosses, all executed in low relief. The north aisle has indecipherable traces of mediaeval wall painting.

Outside, the south wall has a number of scratch mass-dials, the two clearest of which are on the jamb of the Priest’s door to the south chancel. Its churchyard is exquisite - neatly mowed lawns around more recent graves give way to grassy paths and wild flowers in older sections, all shaded by mature trees.