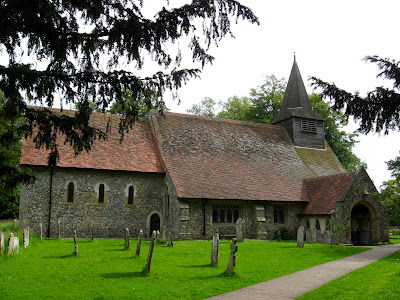 Walberton is a prosperous village, mostly modern except for a leafy enclave around the church, and its wooded churchyard.

The Domesday Book records a priest and church, and the Nave of the current church may well date from the Saxon period. The nave arcades were cut through in the 12th century to link to the aisles. The chancel dates from the 13th, as does the substantial stone porch. The aisles were rebuilt in the 14th or 15th centuries and again in the 17th and 18th, when dormers were added and galleries inserted. There are a number of original lancets, but the rest of the windows date from more recent restorations.

The church is – slightly unfortunately – notorious for a severe restoration in 1903 by the architect Richard Creed. He rebuilt the aisles, roof and belfry (including the supporting frame), faced the walls in hard flint, scraped the interior and replaced the aisle windows in the 14th century  style and the west window in that of the 16th century. He removed a large amount of the archaeological detail, including some of the Saxon walling which incorporated red Roman bricks and tiles in the quoins. The protests led to the establishment of Diocesan Advisory Committees although, arguably, many Victorian restorations were just as drastic.

The setting is delightful and, like nearby Yapton, the roofs sweep low over the aisles. Inside, the most noticeable feature is the irregularity of the arcades: there are four bays to the south and three to the north, similar in style (very plain, round headed and unmoulded), but of varying widths and heights.
The chancel fared better under the restoration, and retains its lancets and 13th century feel.

Furnishings of note are limited to a tub font, from the late 11th century (restored in 1903 from a nearby farmyard), and the glass to Lord Woolton (d. 1964) in the south aisle, which lists his appointments rather like a CV.  The graveyard has a huge early 19th century vault for the Prime family, and a charmingly macabre one to Charles Cook (d. 1767), which graphically depicts his death by a falling tree.