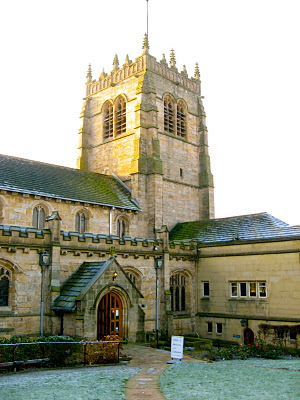 Formerly the parish church, St Peter's became the Cathedral of the new dioceses of Bradford in 1919. The building has an intimate interior with a 15th core, striking 20th century extensions, and some interesting fittings and furnishings.
History

There has probably been a church on the site since 8th century: the remains of two Anglo-Saxon crosses have been found on the site, one of which is incorporated into the present fabric. Described as 'waste' in Domesday, there may nevertheless have been a manor chapel on the site, and a church was recorded here in 1281.

Rebuilding commenced in in the 14th century: the present nave arcades were completed by 1458, and a clerestory was added later in the same century. The church also had chantry chapels, and the tower was completed in 1508. The church was bombarded by Royalist forces in the Civil War, when wool-sacks were hung to protect it. The roof was rebuilt in the 18th century, and the exterior considerably tidied up in the 1830s.

The church was elevated to Cathedral status in 1919, and extensions to the Chancel and West end were added in the 1950s to designs by Sir Edward Maufe. The Cathedral was rededicated in its present form in 1963.

From the outside, the modern extensions are in a reasonably sympathetic but very spare neo-Gothic style, and contrast strongly with the Victorian and mediaeval elements. The site is slightly unfortunate in that the east end now abuts a busy main road; the church is best appreciated from the green on the north side, from which viewpoint it reflects its origins as a substantial parish church.

The interior is dominated by the handsome nave, of eight bays of regular Gothic arches, supported on delicate quatrefoil piers. The walls of the nave and aisles are heavily scraped, and give it a rather rustic feel - in sharp contrast to the tall and clean chancel, which is plastered and whitewashed. There are chapels in the transepts, as well as three new chapels attached to the Chancel, dedicated to St Aidan, the Holy Spirit and St Mary.

The church has a very rich and extensive collection of 18th and 19th century memorials, and glass by Kempe and William Morris. In the north ambulatory are the remains of an Anglian preaching cross. The Bishop's Chair (the Cathedra) has a tall canopy and an interesting bench end, with an image of the old tower, above a rock containing a dragon. The most striking modern furnishing is the Celtic Cross behind the altar of St Aidan's chapel, by Chris Shawcross, depicting people on their pilgrimage, towards an image of Mary and the infant Jesus.

The Cathedral is open every day (limited access on Sundays, only to services) and has a regular cycle of daily services and special events (details on the website).