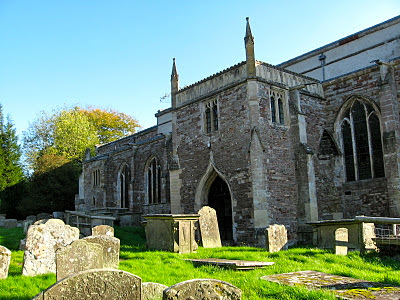 Berkeley’s church is historic rather than pretty, but amply rewards a visit. It sits close to the famous castle, scene of the famously gruesome murder of Edward II in 1327. Most of the present church was constructed at that time, so he would probably have known it, and it would have borne witness to events...

There are records of a Saxon Abbey from the 8th to the 10th centuries, and it continued to be an important site in the early Norman period – Henry II visited in 1121. The remains of the Saxon church may lie where the bell tower is now.

There was a certainly a church on the present site in the Norman period, as the current building contains Norman features: most of the present fabric was, however, erected in 1225-50, including the present nave and west end of the chancel. The chancel was extended around 1300. The aisles were rebuilt in the 14th century, as were the lower stages of the porch and vestry, and the nave roof corbels date from this period too. The 15th century added the Priest’s room above the porch, the fine stone screen, the present nave roof and the Berkeley Memorial chapel.

The church played a role as part of the Castle’s defences in the English Civil war, and the tower was rebuilt on its 15th century base in 1753. The detached position to the north of the church is thought to have prevented it from being used to attack the castle.

An unusual Victorian restoration included repainting the original medieval decoration, found during repairs. This includes a very fragmentary Doom over the chancel arch. They were restored again in 1938.

The church itself is a rather robust building; from the outside, only the detached tower, the porch (with a very fine ogee arch) and west front are what one could call attractive. However, before entering, wander around the graveyard: it has an unusually rich collection of tombs and memorials, in a dizzying variety of styles.

Inside, the only obviously Romanesque feature is the south door: pride of place architecturally goes to the fine west window of five stepped lancets. The nave arcades have clustered piers and capitals of stiff-leaf carving of the Early English Gothic style. An attractive Decorated Gothic Easter Sepulchre and the Perpendicular Berkeley Chapel are both found in the Chancel.

The remains of the stairway to the rood loft can clearly be seen, and a strange staircase high up on the west end has three heads as corbels. It is thought this may have been part of a pulpit. Indeed, corbels abound all around the church, a gallery of late mediaeval physiognomy.

The church is packed with furnishings of interest: the floor is covered in 17th and 18th century stones, but it is the Berkeley tombs which steal the show. In the nave lies the magnificent and beautifully preserved tomb to the 8th Lord Berkeley (1292-1361) and his wife Katherine (d. 1385). He fought at Crecy in 1346, and it was during his ownership that Edward II was murdered in the castle. Their effigies are exquisitely executed in alabaster, he in full armour.

The 11th Lord (d. 1463) is buried in under the arch from the Chancel into the Berkeley Chapel, alongside his younger son, who died on campaign in France. Both are in full armour. Through the window can be seen tombs to later Berkeleys (though the chapel is not open to visitors).

Another memorial worth a look is that to Edward Jenner, the pioneer vaccination (1749-1823), whose house nearby is now a museum. His family are recorded in a floor memorial next to the altar.

The fine stone screen is a rare 14th century survival, and now brilliantly coloured as it would have been originally. The reredos behind the High Altar is by Comper and installed in 1918. Back by the south door, is a large square Norman font, with 4 smaller columns around a central round pier and scalloped lower edge.

The church is the focus of a busy parish life. A visit here can easily be combined with one to the adjacent castle and the Jenner museum.