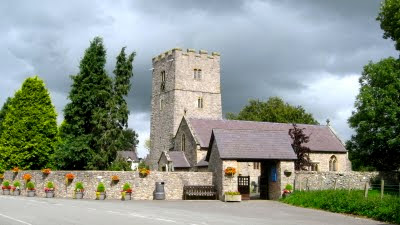 The ancient village of Caerwys has an attractive church, hidden from the main road, in a large and expansive churchyard. It has some interesting and historic furnishings.

Caerwys was laid out as a planned town by Edward I as part of his policy of embedding his conquest of Wales, receiving a charter in 1290. However, it is evident that there was a church here before then: in 1244 it was nominated as a meeting place between Henry III and Prince David of Gwynedd.

The church is dominated by its robust west tower, but also has the curious feature of a double nave, a speciality of the Vale of Clwyd area. Inside, the windows date from the 14th to 15th centuries, with some Victorian renewal. There is a two-bay arcade in the chancel leading through into the north nave, now effectively used as an aisle and separate chapel.

The oldest furnishing is a wall tomb in the south chancel wall, with a 14th century cusped arch containing an effigy of earlier date. This is reputed to be of Elizabeth Ferrers (1250-c. 1300), wife of Dafydd, the last independent Prince of Wales. A window above has a small quantity of mostly jumbled late mediaeval glass, although the top light has two angels or saints carrying heads of wheat, surrounded by various floral emblems, including a Tudor rose.

The chancel is screened off with some attractive woodwork panels, dating from the 17th century, and more, and possibly earlier woodwork forms a dado in the north nave. This includes two splendid facing dragons. Panelling from the box pews also lines the walls, one recording that it was the pew of Sir Thomas Mostyn, Baronet.

The font is dated 1661 and is framed by some broken sepulchral panels of 14th century date, and some later tomb slabs. The door into the tower from the north nave is the original ancient main door.