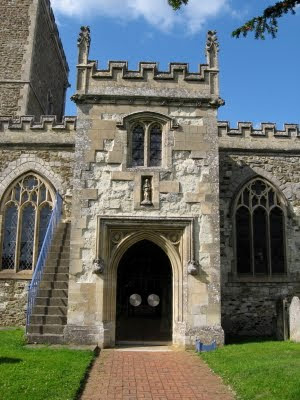 Bletchingly is a small village on the A25 with an impressively large church, with an unusually rich collection of furnishings.

Bletchingley was one of the original ‘Rotten Boroughs’, and a prominent manor that belonged at various times to the de Clares and later the family of Lord Howard of Effingham, commander of the fleet that defeated the Spanish Armada, who was married in Bletchingley in 1539.

The present church is the result of almost six centuries of continuous building; the east wall of the chancel and the robust west tower with its small round-headed windows are Norman, erected around 1090 and heightened around 1160, with a tower arch added around 1175; the south aisle was added in the 13th century, along with the Lady Chapel (now St Catherine’s chapel); a north transept, known as the Ham Chapel, was added in the 14th century; the 15th added the huge porch, rood stair, and new windows in St Catherine’s Chapel. Somewhat later, the Victorians added a north aisle and rebuilt the East wall of the chancel, and added the present reredos, by G E Street.

From the village, the robust tower, along with the south porch and battlemented south aisle lend the church the appearance of a stately home. Inside, the interior is spacious and the variety of internal detail is immediately apparent: tombs, mediaeval corbels, a rood stair, and a wide variety of furnishings compete with each other for attention.

Of these, pride of place goes to the huge Clayton memorial, which completely dominates St Catherine’s Chapel. Sir Robert Clayton (1629-1707) and his wife. Clayton was a banker, MP and one-time Lord Mayor of London, and the confident and sumptuous baroque memorial has life-size statues of him and his wife in their finery (Clayton himself with gilded badges and chains of office) under a huge pediment supported on Corinthian columns. More poignantly, it also includes a figure of their only child, who died in infancy.

A table tomb between the chapel and chancel is that of Sir Thomas Carwarden (d. 1559), Master of revels to Henry VIII, Edward IV and Queen Mary. A number of unnamed brasses are contained in the Ham Chapel, although the most interesting and impressive is that of Thomas Warde (d. 1541) and his wife, in the floor of the tower. The style suggests the figures may have been pirated from an earlier brass. On the floor of the north side of the altar is brass which may represent Hugh Hextall (d. 1476), the Rector who oversaw the 15th century works.

Other items of interest include the pulpit from 1630, the font from 1450, and the south aisle corbels, two of which depicts green men. The window at the west end of the south aisle is by Kemp, with the other two by Comper in matching style.