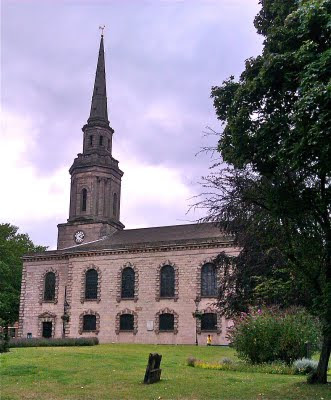 For those who think central Birmingham is an unredeemed sprawl of 70s concrete, the short walk to St Paul’s church will come as something of a revelation. Head towards the Jewellery Quarter from the Town Hall, and you will discover streets of gorgeous red brick Victorian buildings, which slowly give way to modest but handsome Georgian counterparts. In the midst of it all is St Paul’s Square, centred around the lovely and historic church of St Paul’s.
History

St Paul’s is a fascinating church. It was one of two provided for by an Act of Parliament of 1772, to cater for Birmingham’s burgeoning population. It was designed by a local Wolverhampton surveyor, Roger Eykyn, with Samuel Wyatt, a distinguished local architect, acting as an advisor. The design is based loosely on that of St Martins-in-the-Fields in London. The church was consecrated in 1779, although it was 1823 before the handsome steeple was completed, to designs by Francis Goodwin.

The timing and location of the church in one of the heartlands of the industrial revolution meant that early worshippers included the likes of James Watt (1736-1819), inventor of the steam engine, and Matthew Boulton (1728-1809), metal and coin manufacturer, and Watt’s business partner.

In the mid 19th century the church was the centre of efforts to educate the local workers, and by the 1860s they had 120 reading and writing classes a week catering for 2000 adults and 2000 children. During the 20th century, the area became less residential as jewellery manufacturing developed, and the church became a centre for industrial mission, a role it still performs today, alongside a lively Sunday congregation and a strong musical tradition with regular concerts and recitals. It has also been associated with Polish Lutherans for over 60 years.

The church is essentially a classical box, of ashlar with rusticated detailing, and two tiers of windows, with tall rounded arches over smaller, squat segmental arches below. The west end has no portico, but a modest pediment, surmounted by Goodwin’s elegant Grecian steeple, provides a fitting focus.

Inside the immediate impression is of a time warp: the church retains its galleries and a complete set of high box pews and other 18th century fittings. The galleries are supported on tall Ionic columns, which also frame the astonishing Venetian style East Window. This was painted in 1785-91 by Francis Eginton, and is based on a painting by Benjamin West, a court painter to George III. Showing scenes from the life of St Paul, it is a dark and dramatic piece, and completely dominates the modest sanctuary.

Also worth a look is the east window in the south aisle, designed as a memorial to William Hollins, sculptor and architect, and executed by his son Peter in 1843. There are labels showing the location of the box pews of Watts and Boulton, and look out for the monument to the Forrest family, on the west wall, a sad testament to the high rate of mortality in the early 19th century.