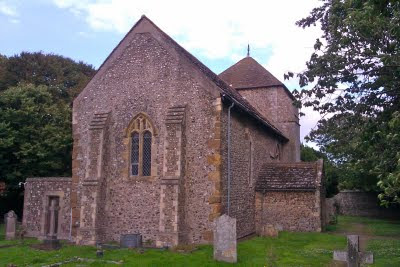 St Julian’s is something of a surprise: set in the sea of suburban sprawl that stretches between Brighton and Shoreham, here is a reminder that some of the settlements, at least, have roots going back much further.
History

There was almost certainly a church here in Saxon times, but the present building dates back to the late 11th century, with the tower, chancel, north aisle and south porch being added (or renewed) in the 13th century, and the windows renewed in the 14th and 15th centuries. The proportions of the nave – narrow and tall - indicate that the Saxon plan may have been retained.

An interesting historic feature is the window in the north chancel wall, originally presumed to provide access to an anchorite’s cell, although some archaeologists have suggested that this window was a squint for a vestry or chapel.

Anchorites were religious people who withdrew from the world for prayer and contemplation, but could also pray for and offer advice to passing travellers. They were sealed into a small cell, with a small window to enable them to see (and participate in) the Mass, through which they were also fed and watered. Anchorites were meant to live and die in their cells, although many were let out and some could move more freely through larger openings (though not here judging by the size of the window).

The north aisle fell into disrepair in the 18th century and was rebuilt in the 19th century, but the church still retains fittings from the 15th-18th centuries.

The building is unusual in being effectively divided by the squat but massive tower in its centre. The outside walls are of flint and rubble, all set in a small wooded churchyard.

Entering through the south porch, the interior is dominated by the handsome 13th century twin arched bay which separates the nave from the north aisle. The north aisle has a lancet, which contains fragments of 15th century glass, including a Tudor Rose and the shield of the Lewknor family. Above the west end is a gallery inserted in 1924, but the Perpendicular windows are of 15th century date. A new sanctuary has been placed against the south wall, incorporating the original 19th century altar rails.

A handsome 13th arch leads to the tower vault, in which are the 18th century pulpit (incorporating 16th century 'linenfold' panels) and 18th century box pews. Above the low round-headed doorway is a blocked opening that gave access to the now disappeared rood loft.

The original chancel, now used as a Lady Chapel, has fine (if restored) Decorated Gothic screen, dating to the 15th century. The East window is modern, but the side windows are 14th century Decorated Gothic designs. The principal items of interest here are the window to the anchorite’s cell on the north wall, and the large Lewknor tomb from around 1540, which takes the form of an Easter Sepulchre (ie a recessed tomb chest). The remains of statues can be seen, though much defaced during the Civil War, with the Resurrection in the centre flanked by the Virgin Mary with the body of Christ (West) and the Trinity (East). An unusual feature is that one of the rosettes on the roof of the tomb is actually a reverse image of the devil, poking his tongue out - helpfully painted in red!