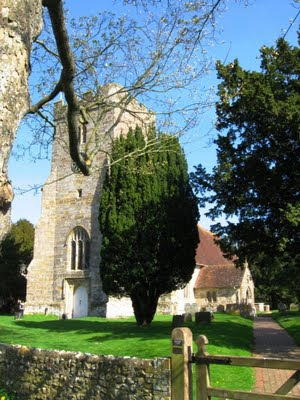 Ripe is an exceptionally pretty village, complete with pub and village shop. The church is set at one end of the village, overlooked by two impressive houses and the junior school.
History

The village is mentioned in the Domesday Book, appearing as Achiltone, with various spellings. Although there was certainly a church here in the 11th and 12th centuries, the present nave and south porch date from the 13th, with a late Decorated chancel (c. 1350) and a fine Perpendicular tower, which bears the buckles of the Pelham family as label stops, indicating their patronage.

The interior is exceptionally attractive, and all eyes are immediately drawn to the east window, with its beautiful curvilinear tracery. The north-east corner of the nave retains the two doors of a staircase that once led to the rood loft, and between them and the chancel arch is a delicate Decorated arch indicating the site of a nave altar, with a plainer matching one on the south side; records legacies left for two altars, one to St John and St Dominic, and one to Our Lady of Pity. To the west, the tower has a very handsome Perpendicular window.

Furnishings of note include a much restored late 13th or early 14th century font, a fine sedile and piscina in the chancel, and substantial fragments of mediaeval glass in the otherwise clear east window. The outside door jambs of the south door are worth a look for their graffiti, which include a votive cross on the east jamb, and a heraldic shield with three Pelham buckles on the west jamb.

Outside, there are some fine 18th century headstones with fearsome skulls, and in the west graveyard is the grave of Malcolm Lowry (1909-1957), the troubled writer best known for his novel ‘Under the Volcano’, who died while living in a boarding house in the village.