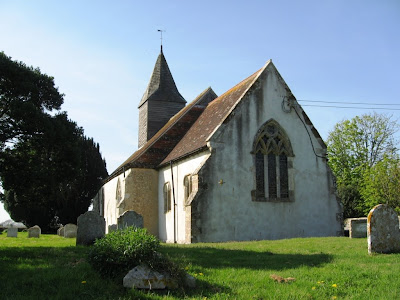 This little church, with its pretty weather-boarded bell turret, has a nave dating from the late 13th century, with windows mostly in the late Early English style, with simple bar tracery. The chancel dates from the 14th century and its windows have the more familiar Decorated Gothic form. Outside, the east and west walls of the nave are tile hung, and above the north doorway are fragments of Norman zig-zag carving.
The interior is unusual for the absence of a chancel arch - in fact the chancel walls project into the nave. The east end of the nave roof has a most complex arrangement of beams, with six braces attached to the easternmost king-post.

The most interesting features are the stained glass: in the curvilinear Decorated east window are 14th century fragments relating to the donor, the rector, Thomas Diliwyt, who held the living between 1388 and 1409. The glass includes the inscription: John Diliwyt Rector Huise Ecclesie Me Fieri Fecit. But better still are the remains in the south east nave window, which depict St Thomas a Becket, dressed as a Bishop, his right hand raised in blessing and his left holding a crozier, with the letters ‘S. T.OM.AS’. This glass is thought to be late 13th century, making it the oldest in East Sussex.