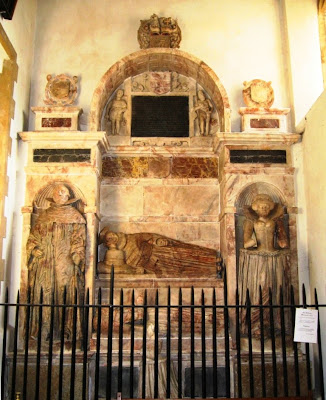 This large and impressive church, with its landmark spire, sits in the middle of an attractive and historic village.
History

The village name is Saxon, recorded in Domesday as ‘Cetelingei’, the place of Cedd’s people, but it is unclear exactly when the church was first built. However, when the chancel was rebuilt in the 19th century, traces were found of Norman masonry from the 11th and 12th centuries, suggesting there was an earlier church on the site.

The present nave was probably built in the 13th century, from which period it is clear the chancel arch and two lancets in the aisles remain. The nave arcades are later, probably 14th century, as are the Perpendicular windows in the north and south walls of the aisles, which presumably replaced smaller, earlier windows. The south transept (of which more later) has a large, rectangular Elizabethan window with transoms. The chancel itself was rather thoroughly rebuilt in 1864.

The fine tower, with its 60ft spire, dominates the exterior; the west door beneath has label stops in the shape of the "Pelham buckle", a familiar feature in the area, denoting the generosity of the Pelham family in 14th century donor.

Inside, the interior is dark thanks to some particularly heavy Victorian glass, but the nave at least retains its 18th century box pews. There are three bays to the nave arcade, and a king-post roof (possibly 14th century), but eyes are drawn to the church’s most prized possession, the Jefferay monument, in the south transept.

This huge 16th century monument, executed in pink alabaster, commemorates Sir John Jefferay (d. 1578), Chief Baron of the Exchequer under Elizabeth I, and MP for Arundel and East Grinstead. He lies in his legal robes, some height above his first wife, Dame Alice, also recumbent. Very unusually for the period, they are flanked by the upright, life-sized figures of their only daughter, Elizabeth, and her husband Sir Edward Montagu. (Only one other monument of this period in England has standing figures). Below is a kneeling grand-daughter, also Elizabeth.

Lady Elizabeth Montagu is dressed in the most incredibly elaborate costume, with a tall collared ruff, a remarkably revealing cleavage and a huge farthingale; Pevsner described her costume as ‘preposterous’. More humorously, a friend of mine suggested her outfit would make a perfect model for a toilet-roll holder. Regardless, the monument is generally well preserved.

Other monuments include a charming wall tablet to William Jefferay, (d. 1611) with his wife, attended by his two sons and seven daughters. The tablet records that all the children survived – a rarity in the 17th century. The eldest son, Thomas, emigrated to America in 1631 and is recorded as living in Weymouth, Connecticut in the New England registers.

In the nave floor is a brass commemorating John Jefferay, the first of the local Jefferay family, who died in 1512, and his wife Agnes. Other memorials include a fine polished black stone slab in the chancel to the Bromfield and French families, local iron-founders.

Other furnishings of note include the 18th century pulpit, its sounding board with an unusual ogee cap; and a rather intimidating 20th century carved wooden eagle lecturn, brought from a derelict church at South Heighton.