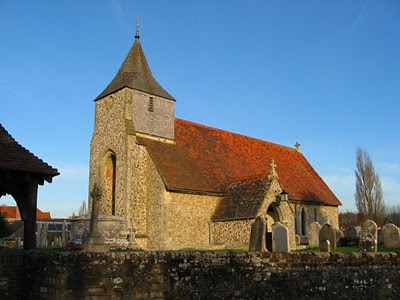 St Nicholas is a typical small Sussex village church, situated on a cul-de-sac of a village street on the west side of the Selsey peninsular. Although Itchenor is a Saxon place name, and permission to build a church was given to the Lord of the Manor around 1175, most of what we see today dates from the 13th century.

The exterior is dominated by its pretty shingled turret, which was rebuilt in the 19th century and partly supported on two buttresses. (The church guide-book has an early sketch showing a narrower turret with no buttresses). The porch dates from the same century.

Inside, the church is a simple undivided space, with no division between chancel and nave, and no aisles. Most of the windows are mediaeval: there are 13th century lancet windows in the north walls, and three more in a stepped arrangement in the east. The south wall in the Sanctuary has lancet windows from the 13th and 14th centuries, the latter with a trefoiled head. The south nave wall contains a 15th century two-light window.

The best furnishing is the 13th century octagonal font, with elegant gothic arcade decoration on the bowl. There are three bells, dated c. 1530, 1665 and one from the 17th century.

The Parish is now linked with those of Birdham and West Wittering; the joint web-site gives details of services.