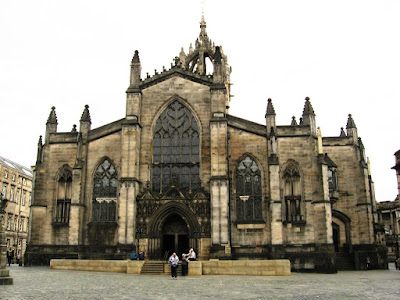 St Giles is not the prettiest or most dramatic of cathedrals, but has a complex and interesting history and a striking setting on the Royal Mile.

There has been a place of worship on the site for around 900 years, and possibly longer, as there is a record of a parish church in Edinburgh in 854AD. A church on the present site was built in the 1120s in the Romanesque style. It was dedicated to St Andrew in 1243, but later rededicated to St Giles.

This church was later enlarged in the Gothic style, and the present choir, built between 1320 and 1380, is the main remnant of this building. Partially burned in 1385, it was repaired and further expanded during the 15th and 16th centuries. The Albany Aisle (1409) and the Preston Aisle (c. 1454) date from this later period. Private chapels were also inserted, and by the 16th century there were some 150 of them crowding the interior.

However, the church underwent major changes as a result of the ministry of the famous Scottish Reformation churchman, John Knox, who was Minister at St Giles 1559-1572. During this period the church was reorganised to reflect the Reformed style of worship, which included removing many of the chapels and much of the stained glass. Because of his Ministry, the church is regarded by many as the spiritual home of Presbyterianism. The building was also partitioned to enable other uses to take place, which over subsequent years including a police station, fire station school and coal store.

During the 17th century, the church experienced periods of Episcopal (Anglican) control, and was elevated to Cathedral status in 1635-38 and again in 1661-89. These episodes reflected tensions arising from King Charles’ plans to reintroduce episcopacy in Scotland: those opposed to the move signed a National Covenant and, by the end of the century, the Presbyterian Church of Scotland had become the Established church. Thereafter, St Giles ceased to be a Cathedral, although the name has stuck.

These tensions are well illustrated by two impressive tombs in the church: those of James Graham, Marquess of Montrose, who resisted the National Covenant, and who was executed in 1650; and his opponent, Archibald Campbell, Marquess of Argyll, himself executed in 1661. Montrose was interred in the church after the Restoration of the Monarchy in 1660; his memorial dates from 1880. That to Argyll, in a similar style, dates from 1894.

The exterior was substantially restored in 1829, and from 1872 the partitions were removed and the interior opened up, with new stained glass windows inserted (all the glass dates from the 19th and 20th centuries). The major 20th century addition was the Thistle Chapel, built in 1911 for the Knights of the Thistle, Scotland's order of chivalry. It was designed by Sir Robert Lorimer in an elaborate 15th century high Gothic style.

The church now dominates the central section of the Royal Mile, and its tower lantern is a prominent landmark. The exterior is impressive, but most of the interest lies inside. The interior is dark and cavernous, an effect magnified by the presence of double south aisles and numerous small chapels (also referred to as aisles), the arcade arches giving a forest-like appearance.

Although it has transepts, the addition of aisles and chapels give it an almost rectangular plan. The architecture is largely late Decorated and Perpendicular Gothic, although many of the windows date from the 19th century restorations.

Most impressive is the Thistle Chapel which, with its complex vaulted ceilings and elaborate woodwork, is a testament to early 20th century workmanship. The Chepman aisle houses Montrose’s impressive memorial, complete with life-sized alabaster effigy in full 16th century military garb. Argyll also has a life-size effigy, in Civilian dress, located in St Eloi’s aisle. The south Preston Aisle, which leads to the Thistle Chapel, dates from 1454 and was erected to contain a relic (an arm bone) of St Giles, although this was lost in the reformation around 1560.

The 15th century Albany Aisle is now dedicated to those who fell in the two World Wars, and includes memorials to the various Scottish Regiments. The church walls are covered in numerous other memorials, of varying quality and interest, predominantly from the 19th century.