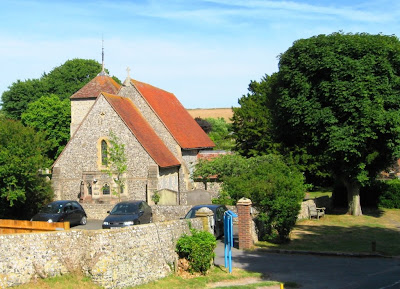 Typically Sussex from the outside - flint walls, tiled roofs and a low tower - the first impression of East Dean’s interior is of modern restoration. However, a more careful inspection is rewarded with a wealth of historic detail.

The oldest part of the church is the low 11th century tower, which may predate the Conquest. This was originally part of a nave on the Saxon model, and shows signs of a former arch to the east for an apsidal chancel.

The present nave was added in the 12th century, and the chancel – which has a prominent inclination to the north - in the early 13th century. The nave was extended west in 1885 to include the bridge and organ, and again in 1961-2 to provide the bright modern baptistery.

Once inside, the nave to the west, including the baptistery, are light and bright, thanks to a wealth of windows with clear glass, all undertaken in a sympathetic modern Gothic style. The chancel arch is clearly modern, but the chancel walls shows the remains of a pair of now-blocked lancets to the north (with pointed heads) and to the south (with rounded rear-arches), next to another, larger pointed archway, which corresponds to a blocked 14th century trefoil headed window embedded in the wall outside. The 15th century east window is flanked by the shafts of earlier Early English lancet windows. There are yet more blocked arches in the wall between nave and tower.

The fittings are of particular interest: pride of place goes to a beautifully preserved Jacobean font, complete with sounding-board, with delicate carved decoration. Beneath the pulpit’s lectern an inscription dates the whole to 1623. There is an aumbry by the pulpit, opposite another opening covered by a modern grille.

By the door is a damaged stoup of an elaborate decorated design, an octagonal basin beneath a trefoiled head. Next to the tower door are the remains of a tombstone bearing the arms of the Bardolf family. Finally, the font, although modern, has been designed around fragments of the original 11th century font.