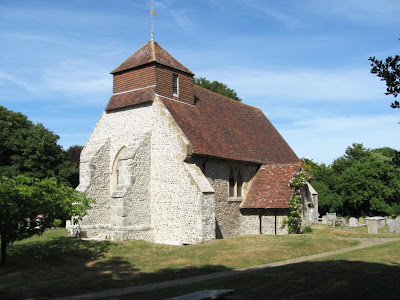 Despite being next to the busy A259, Friston’s little flint-built church sits in a lovely spot, next to Friston pond, and from its graveyard are sweeping views down to East Dean.

The nave is thought to be mid-11th century, extended west in the early 12th century. The chancel and porch are 14th century, as are many of the windows and, possibly from the 14th or 15th centuries, the fine king-post roof. The only modern addition is the 19th century north transept.

The interior is intimate and charming: on the south wall, remains of a small round-headed window and door are thought to be Saxon or at least in the Saxon-Norman overlap, the present south door being Norman. The handsome west window is 14th century. The chancel arch is wide and low, and the tiny chancel has unusual blank arches to the north and south, both with a single trefoil-headed light, and a blank reredos arch to the east, beneath a 19th century double-lancet east window.

The fittings are of great interest. The nave contains two remounted brasses of Thomas Selwyn (d.1539) and his wife, but more splendid are the later Selwyn monuments, moved from the chancel recesses to the north transepts in the 19th century.

Sir Thomas Selwyn (d. 1613) and his wife are depicted kneeling, facing each other across a prayer desk, within an elaborate pillared and arched frame of alabaster. Below the children all face east, with three babes in swaddling clothes beneath the prayer desk - ‘like small French loaves’, according to Pevsner. That to Edward Selwyn (d.1704) is a simpler classical design, carrying a long Latin memorial.

In the porch, the east window surround has an unusual form of mediaeval graffiti, showing Christ on the Cross, and other marks, possibly showing a Gothic window. There are several aumbries, piscina and stoups, all 14th century, and an elegant bowl font, dated to around 1700.

Outside, just to complete the picturesque is a fine tapsel churchyard gate.