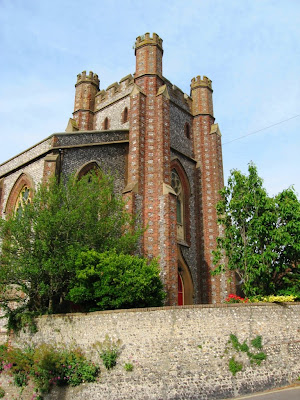 St John-sub-Castro - or St John's-under-the-Castle - is a large early Victorian church just to the north of Lewes castle, which incorporates 11th century elements from a previous building, and has a lovely, hidden graveyard.

The first church on this site (actually slightly north of the present church) was erected at least as early as the 11th century, and possibly before. Details of this church are sketchy - almost literally - as what is known of it comes from drawings and descriptions made before it was rebuilt.

These show a traditional Sussex church, with elements from the 12th-14th centuries and a tower, and which lost its chancel some time around the reformation.

The present church was designed by George Cheesman, part of a family business based in Brighton, and completed in 1839. This incorporates some Anglo-Saxon elements from the fabric of the earlier church. An apsed chancel was added by Philip Currey in 1883.

Cheesman's design is neo-Gothic in style, of flint with red brick detailing, and tall windows with broad transoms, decorated with trefoil headed arches. The axis runs north-south, with the ritual east end to the north.

The most prominent - and best - feature is the beefy castellated tower at the west end, which dominates the view along Abinger Place. Pevsner was unkind about the window tracery, but as a whole, the building works well enough. The spacious interior has galleries on iron columns on three sides.

Of most interest, however, are the relics from the earlier church, set into the walls either side of the apse at 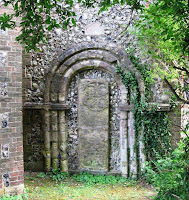 the east end. On one side is a late Anglo-Saxon doorway, with three demi-shafts supporting an arch with three matching roll mouldings, and unusual, wide square marble abaci which cut across all three. In place of a door, a mediaeval tombstone slab decorated with a cross design is set into the wall.

On the opposite side, next to the churchyard footpath, is an archway which may have been set in the old church's chancel - there is some debate about whether it was the chancel arch proper or not. Again, in place of a door is another ancient cross tomb slab, of similar design to that on the other side.

Anchorites were an extreme type of hermit, who were literally sealed up in a cell attached to a church. Through a window onto the chancel they could participate in services, as well as being fed and watered. They usually stayed there until death.

The churchyard itself is also worth a look; it is a wonderfully hidden space; semi-derelict, surprisingly large and heavily wooded.